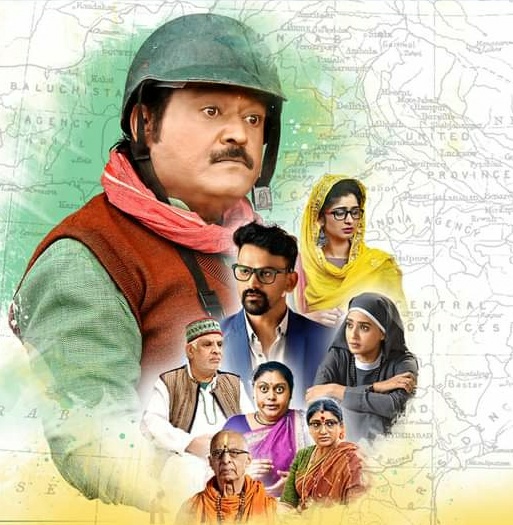 The coming together of Navarasa Nayaka Jaggesh and director Vijayaprasad after their hit combination in Neer Dose has made Totapuri one of the most awaited films in Kannada. The announcement of the film being made in two parts was met with surprise a few weeks ago. Now comes another surprising announcement, the film is being released in five langauges. Apart from Kannada, it will have dubbed versions in Tamil, Telugu, Malayalam and Hindi.

However the film team does not call it a pan-India film but rather likes to call it the first-ever ‘South Indian film’. There is a specific reason for this says KA Suresh, who is considered one of the most successful producers in Kannada starting from Govindaya Namaha. “The characters you find in Totapuri can be found in the societies of Karnataka, Tamil Nadu and Kerala. It is not easy to find Hindu, Muslim and Christian communities living and interacting in such close proximity anywhere else. That is the reason we call this the first ‘South Indian film,'” he says.

The subject and story however is not targetted at just south India. “The characters are South Indian, but the story is universal. Today, we watch Korean web series and Iranian films and relate to the characters. Director Vijayaprasad dwells deep into the emotions of the characters he creates. It is these emotions that makes a story and character universal. Totapuri has that appeal,” he said.

Totapuri has an ensemble cast that includes Jaggesh, Dhananjaya, Suman Ranganath, Aditi Prabhudeva, Dattanna and Veena Sundar. Suresh says the reason for turning the film into two parts was its vast subject. “Every bit of the film is entertaining. It would have been unfair to leave out anything. Even as stand-alone films, Chapter 1 and 2 will make sense,” Suresh said. Though the release date of the film is not yet finalised, there will be a gap of three months between the first and second chapters.