After Shivaji Suratkal, Ramesh Aravind will be seen in another thriller which is releasing on November 19. The film, 100, also sees Ramesh Aravind returning as a director. The film’s producer Ramesh Reddy, spoke about his experience working on this film.

Q. How was your experience working with Ramesh Aravind?

A. I have made three films before this. But this film, 100, has given me more joy and a plesant experience. I have special regards and love for Ramesh Aravind. When I approached him for the remake of Thiruttu Payale 2, he said he will only act in the film. But I insisted that he direct it as well. He agreed finally but his condition was that he would change the story according to his views. I had complete faith in him and gave the entire responsibility to him.

Q. Since you had selected the original story to be remade, were you involved in the changes being made?

A. As I said, I had full faith in him and he took on the entire responsibility. The shooting and making of this film was done in such precision that my perception of the film industry and film making changed completely. I do not want to recall my earlier experiences, but after working with Ramesh Aravind, I am really surprised that people in the film industry can be so good, precise, dedicated and pleasant to work with. Making 100 was such a smooth affair. I may visited the shooting sets twice or thrice. The entire film making process was very positive.

Q. Is that a template you would life to follow in your future films?

A. This is quite a model for making films. But you cannot impose anything on anybody. In my field of business (real estate) two plus two is always four. But in film making, each person is different. The temperament, styles all change. Film making is not as clear cut as construction. It is not easy for me to adjust to this system.

Q. Why did you choose this story?

A. I liked the subject of the original. Despite being a thriller, it is a film you can watch with your family. It was not a simple liking for the story, but it has made a deep impact on me. In fact, an incident similar to the one in the film happened to a very close friend of mine recently. The matter escalated to reach the police station and became huge. So, I can vouch from my own experience that the subject we have selected is close to reality and a perfect film for the family audience.

A. The positive vibes I get from 100 makes me confident. Ramesh Aravind’s work gives me confidence. It is true that I lost money in all my previous films. But it is success that provides you the necessary push to make new things. If this film succeedes financially, it will give me the confidence to make more films.

Q. What are the release plans?

A. The film will release in between 120 to 150 theatres across Karnataka. We have dubbed it in Telugu which will release subsequently. 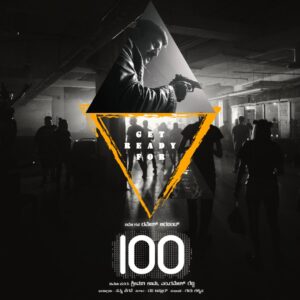