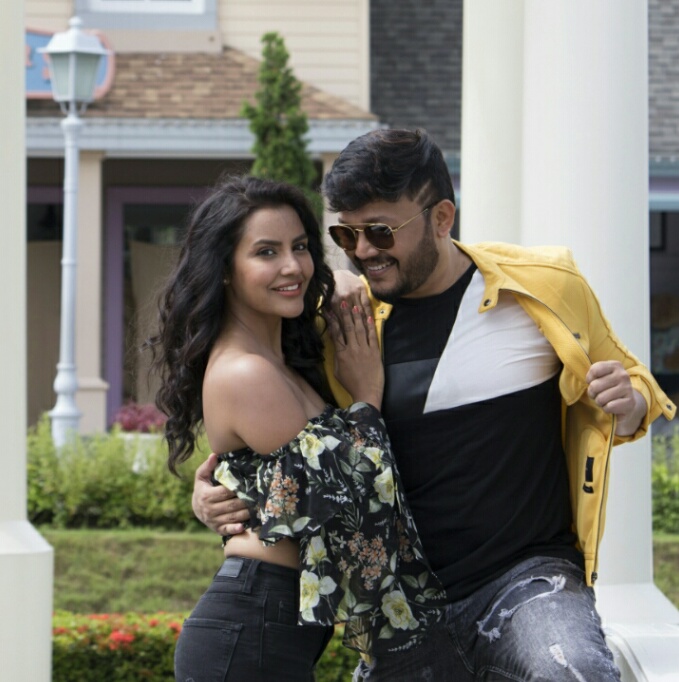 The offered Orange from the Director Prashanth Raj has flavour appreciated for its impeccable taste, aroma, high level of comedy dose and extensively entertaining for all Ganesh fans. It is a fun riot comedy entertainer with love and family emotions.

A modern day Robinhood Santhosh(Ganesh) lands up into jail while stopping four theives who had planned to loot a farmers bank. As the cops made him serve the jail term along with other theives. After his jail term, his journey in train to his place makes him meet Radha(Priya Anand), who had eloped from her house to meet her boyfriend Prashanth and take him to her father. As her father Hulli Veranna(Avinash) wants her to get married to the one he selects.

Radha explains her plea to Santhosh, and also tells about a khadga(bangle) which is very precious to her family. That khadga has to be worn by the son in law of her family. Meanwhile, a theif tries to steal and Santhosh catch hold of him. In this process, he miss the train. He feels, its a important khadga to her family so he plans to return it to Radha’s family. As he reaches with the khadga to Radha’s house, her father Huli Veranna thinks Santhosh is his daughter’s boyfriend.

However, Santhosh tries to convey to Huli Veeranna and family that he has come to return Radha’s missing khadga and he is not the boyfriend of Radha. But the circumstance does not let the family listen to Santhosh words, they tell him to stay back in their house till Radha returns home. Later Radha returns home and finds Santhosh at her home enacting as her boyfriend which irks her.

The drama of Santhosh acting as Radha’s boyfriend continues till Prashanth her true boyfriend comes to her home with his parents. Till then both of them act as boyfriend and girlfriend, as her father warns her to get married to Santhosh. Meanwhile, one of the Hulli Veranna’s rival Narasimha(Devgill) attacks Veranna and wants to forcibly marry Radha so that he can get all their wealth. Here enters Santhosh to save Veeranna and Radha from Narasimha. He wins everyones heart after saving, Radha’ s boyfriend Prashanth enters her house. How Santhosh, Radha manage the whole thing through their lies. And whether Radha marries her boyfriend or Santhosh is the story.

The story is etched so well that it has all commercial elements comedy, dialogues, music and drama for Ganesh’s movie. Ganesh is always at his best in his performance. Priya Anand in her second Kannada movie entertains with her character.

Whenever there is a screen presence of Sadhu Kokilla, Rangayana Raghu, Ganesh and Ravishanker there is fun guaranteed. Music scored by Thaman is good. It is a good treat for all set of audience to watch this movie.