Promising young hero Adivi Sesh who completed double hat-trick hits with HIT-2 recently announced G2, the sequel for his path-breaking film Goodachari, as his next project. While the Goodachari was set in India, G2 is going to be international. The story for the movie is provided by Sesh himself.

Vinay Kumar Sirigineedi, the editor of “Major”, will be making his debut as a director with the movie. Well-known producers TG Vishwa Prasad and Abhishek Agarwal who delivered All-India hits like Kashmir Files, Karthikeya 2 and Major will be jointly producing the movie under the banners of People Media Factory, Abhishek Agarwal Arts and AK Entertainments India Pvt Ltd.

Besides releasing the first-look poster, the makers have also unleashed a “Pre Vision” video during a press meet in Mumbai. Sesh in a slick and stylish look in a formal outfit is seen shooting someone with a gun while falling from the top of the building. The actor has undergone a makeover for the movie.

Coming to pre-vision, the last visuals of Goodachari where Sesh goes all the way from India to the Alps Mountains are shown, followed by showing his first look in G2. Shooting commences 2023, announced they. Needless to say, G2 will be much bigger, in terms of the span of the story, making, technical standards, and international crew. The same can be noticeable in the poster and pre-vision. 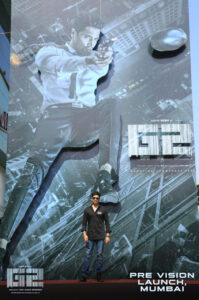