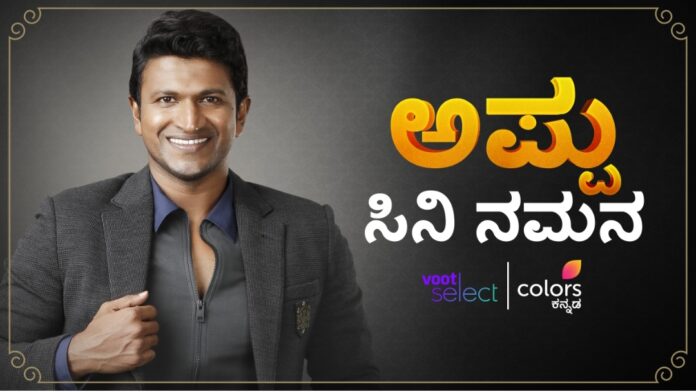 In the loving memory of late Kannada superstar Puneeth Rajkumar, Voot Select and Colors Kannada are all set to take the fans on a trip down memory lane with some his finest movies from yesteryears. Voot Select and Colors Kannada will release six super hit movies starring Power Star Puneeth Rajkumar, fondly called as ‘Appu’ who has made a place in the homes and hearts of the Kannadigas and movie lovers alike.

Appu’s movies have enjoyed a cult following owing to his stellar performance and unmatched acting skills. His untimely demise last year shook the fans, family, and well-wishers from all across the country, who now have a treasure trove of some of his finest performances to reminisce and relive. As Puneet continues to shine bright in the hearts of his fans, Voot Select is all set to extend a heartfelt tribute to the distinguished actor by streaming some of his blockbuster movies such as Appu, Abhi, Namma Basava, Aakash, Maurya and Ajay on 28th October. On the other hand, starting from 27th October, Appu Cini Namana comprising of all six movies will premiere on Colors Kannada every week till 19th November. Akash, Maurya and Appu will be premiered on Colors Kannada from 27th-29th October at 2 PM. Some of his other superhit movies like Ajay, Namma Basava and Abhi will premiere on 5th, 12th, and 19th November respectively at 2 PM.

From a college boy in ‘Appu’, to a doting son in ‘Abhi’, to a rustic in ‘Namma Basava’, a responsible young boy in ‘Aakash’, a kickboxer in ‘Maurya’ to a Kabaddi champion in ‘Ajay’, these much-loved films are a true testament of our Appu’s acting prowess and versatility. And that’s not all, these movies are also widely known and enjoyed by the fans for its foot-tapping music and grooviest dance moves. From the cult favourite ‘Taliban Allah Allah’ to the soothing ‘Aaha Entha Aa Kshna’, the songs are sure to take viewers down memory lane as they remember their beloved power star.

Tune in to Voot Select and Colors Kannada to relive some of the timeless hit movies of the beloved Appu.