The best movies, actors, and technical talents from Southern India were felicitated with the coveted Black Lady for their work across films released in all four languages between 2020 and 2021. This mega celebration took place in the beautiful Garden City of India, Bengaluru for the first time on October 9, 2022 at the Bangalore International Exhibition Centre.

The 67th Parle Filmfare Awards South 2022 with Kamar Film Factory presented its audience with glamour and entertainment as celebrities from all four film industries gathered to celebrate the talent and to entertain the audience with their performances.

This year’s Filmfare was special because the event happened LIVE in front of a cheering audience after two years. The grandest stage of Indian Cinema showcased spectacular performances by the gorgeous divas like Pooja Hegde, Mrunal Thakur, Krithi Shetty, Saniya Iyappan, and Aindrita Ray who made the audience groove on the beats. They were the top entertainers of the night as Pooja Hegde had the audience hooked with her dance moves to some of the popular hits like Gudilo Badilo, Andha Arabi, ButtaBomma, and more. Mrunal Thakur left the audience in awe with her sizzling performance on songs like Oo Solriya Mama, Kannil Kannil, Poovai Poovai, etc. Meanwhile, Krithi Shetty, Saniya Iyappan, and Aindrita Ray put on their best show which kept the audiences entertained. The exceptional award ceremony was hosted by the charming duo Diganth and Ramesh Aravind who were seen engaging with the audience and celebrities and making the evening a fun and entertaining affair for everyone.

The prestigious Lifetime Achievement Award for this year was bestowed on Allu Aravind. His wife took this opportunity to praise him for the first time on stage as he dedicated the award to his father who completed 100 years of age. The Awards also honoured the beloved star of Kannada cinema, the late Puneeth Rajkumar with the Lifetime Achievement Award posthumously. Coincidentally, it happened to be his death anniversary.

The entire team of Pushpa: The Rise – Part 1 cheered in joy when the film received the Best Film Award Telugu. For his mind-blowing performance in this action movie, Allu Arjun came out as the winner under the Best Actor (Male) Telugu category. And the award for Best Actor (Female) went to Sai Pallavi for her outstanding performance in Love Story. Director Sukumar Bandreddi received the award under the Best Director Award by Popular Choice Telugu category for the film Pushpa: The Rise- Part 1.

Jai Bhim was awarded the Best Film Award Tamil as the crowd and the cast members of the film cheered in joy. Director Sudha Kongara was felicitated with Best Director Award by Popular Choice Tamil for his super hit film Soorarai Pottru. Actors Suriya and Lijomol Jose were felicitated with the Best Actor (Male and Female) Telugu category for their brilliant performances in their films Soorarai Pottru and Jai Bhim respectively.

Nimisha Sajayan was awarded the Best Actor (Female) Malayalam award for her film The Great Indian Kitchen. Biju Menon’s excellent performance in the film Ayyappanum Koshiyum won him the Best Actor (Male) Malayalam category award and the audience applauded him as he walked up the stage. The winner of the Best Film in Malayalam category was none other than Ayyappanum Koshiyum. And finally, the Best Director Malayalam was awarded to Senna Hegde for the film Thinkalazhcha Nishchayam.

Raj B Shetty was invited onto the stage to collect his Best Director Kannada award for the master-piece Garuda Gamana Vrishabha Vahana. The audience applauded as Act 1978 won the Best Film Kannada award. Yagna Shetty also bagged the Best Actor (Female) Kannada for her role in Act 1978. Best Actor (Male) Kannada was awarded to Dhananjaya for his performance in the blockbuster movie Badava Rascal. 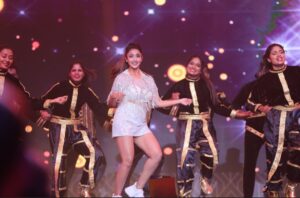 JANI MASTER for FEEL THE POWER from YUVARATHNAA