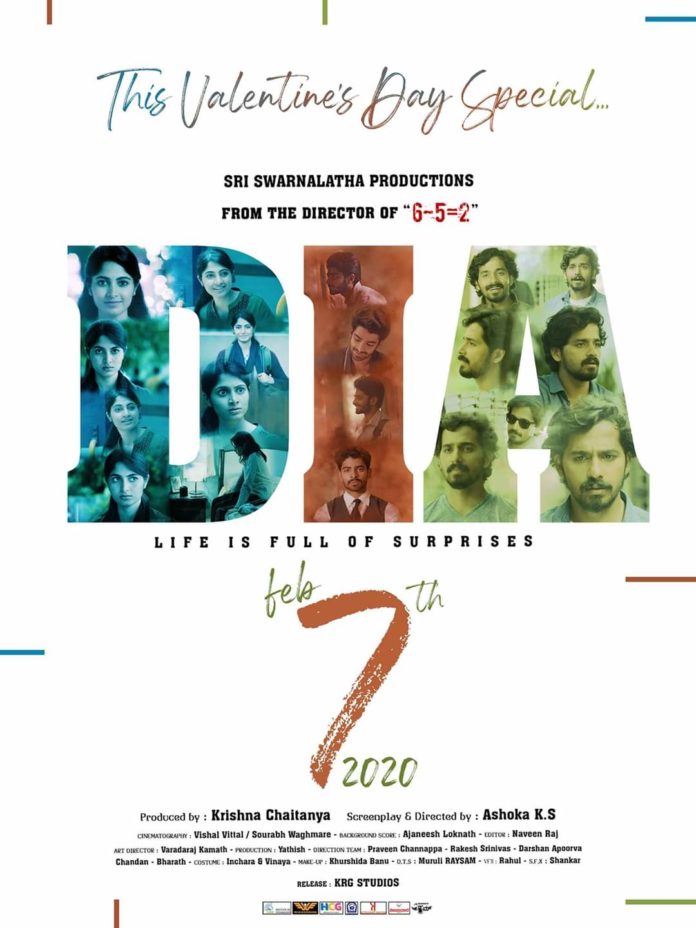 From the director and producer duo who created a new wave with an epic 6- 5=2 horror tale, are back with a thrilling love story ‘Dia’.

Director Ashok K S and Producer Krishna Chaitanya have come together with this interesting plot that has international standards of story telling for the first time in Sandalwood.

The makers have taken a long time to come up with this project that is nearly 3 years. But Ashok assures that the time taken was to give a quality content to all the audience who loved his previous hit movie. Dia tells the story of a young, introverted girl whose routine life brightens up when she falls for Rohith, one of her fellow college mates. This romantic drama will make you lose yourself in the emotional journey of a girl falling in love.

The sensational director’s last movie 6-5=2 was released in 2013, and now he is experimenting with a love story, which will have no songs. The film’s story and screenplay has been written by Ashoka, and it is produced by Krishna Chaitanya under the banner Swarnalatha Production which gave hit movies like Karvva.

1. Swarnalatha Productions next with Prashanth Neel

Also there next venture to be produced by KGF director  Prashanth Neel that has Roaring Star Srii Murali in lead. Also a movie with RJ turned actor Rockstar Rohith is bankrolled by Krishna Chaitanya. Some good movies to be produced under Swarnalatha Production banner.

With newcomer Kushi in the lead, the romantic drama also features Prithvi and Deekshit Shetty. The background score has been composed by Ajaneesh B Loknath, and the film has two DOPs – Vishal Vittal and Sourabh Waghmare – giving some amazing visuals with their camera work.

The movie is hitting the bigscreen this Valentines Day, the date was postponed earlier due to several movies hitting theatres back to back. Now the date has been fixed, Dia to be in theatres on 7 February across the theatres in Karnataka. Whereas KRG Studio, headed by Karthik Gowda, is distributing it.