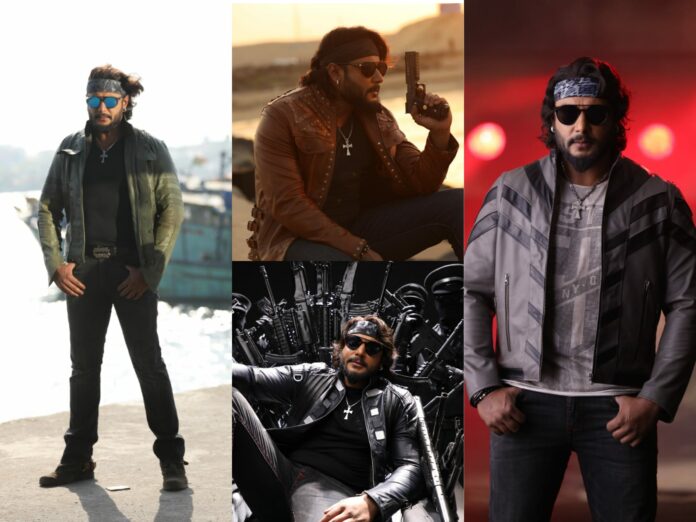 One of the movie that has generated a lot of buzz with its trailer, songs and back to back promotions in every platform was Roberrt. The Sandalwood cine-goers have been looking forward to watch a good film in theatres post Covid, With no big films releasing in 2020. It was Challenging Star Darshan, who had set high hopes for industry and theatre owners with Roberrt movie.

The film starts in the backdrop of Uttar Pradesh, where a humble and polite Raghava (Darshan) works as a main chef at a Brahmin’s food catering center. He has a 5-year-old son Arjun, who always seeks revenge against the people who harass his father. During an event, Raghava who tries to rescue his son from a mishap, also saves an MLA from getting killed.

This would irk a wicked politician Tripathi(Ravi Kishan), who in-return would send his henchmen to find out and capture Raghava. After tracing Raghava, he tries to kill them both. However, the wicked politician gets murdered by Raghava under mysterious circumstances. As the killing of Tripathi leads to gangsters Nana (Jagapathi Babu) and Ravi Shankar.

Rest of the story has to be watched in the theatre, It would be not right to reveal everything. The audience has to figure out the story of Raghava and his past.

This movie for sure has once again proved that Darshan is one of the finest actors. His expressions and performance in the movie are one of his career best. Vinod Prabhakar and Asha Bhat have done a decent job.

While Ravishankar’s character and dialogues will entertain everyone. Also Jagapathi Babu, Ravi Kishan and Devraj have done justice to their roles. Interestingly, the comedy in this movie is humourous with Chikanna. Whereas, the role essayed by Shivaraj K R Pete has a social message for LGBT community.

The BGM by Harikrishna and music by Arjun Janya is tailor made for Darshan’s movie. Every song in the movie is a visual treat except the Ba Ba Na Ready song. Overall, the art work and making of each frame shows the strength of the production team.

Director Tharun Kishore Sudhir in his second movie as a director has choosen a regular revenge drama that revolves around the concept of friendship. But his screenplay makes the movie engaging till the end.

However, the audience might have watched all these over and over again. If one is a movie buff, In fact 3-4 scenes from the movie will remind of Tamil and Telugu films. But Tharun has ensured that Darshan fans will enjoy watching their hero in a new avataar.

Without an iota of doubt, Roberrt movie is an entertainer for all age groups. Even after an year and half gap Darshan gives a fresh hopes to other Sandalwood movies, as it garners audience apart from Darshan fans.

This movie will not just be loved by the masses, but also attract family audience. One eagerly waiting to watch a star movie after an year will not be disappointed.