Rocking Star Yash starrer KGF : Chapter 1, directed by Prashanth Neel has made a new history in south India. KGF is the first Kannada film and third South Indian movie that got released in Pakistan.

The KGF movie, which has been a major hit all over the world, and demand for the movie is tremendous in Pakistan. KGF has become the first Kannada film to be released in across borders of our nation in Pakistan and China.

The movie was released on Thursday, the advance ticket booking started in Pakistan for friday and weekend after audience good reviews.

The ticket booking had started in the Islamabad Club Ticket Booking site from Thursday. After the blockbuster hit of Rajamouli’s Baahubali 2 and Superstar Rajinikanth’s 2.0, this is the third movie from South India to release in Pakistan. The movie is loved by all the youngsters and action lovers. 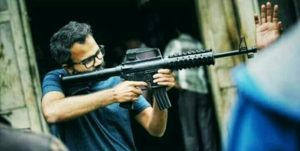 Indian cinema is no stranger to Pakistanis, Generally they are big fans of hindi movies. Salman Khan and Shahrukh Khan are mainly loved by Pakistani citizens.

However, for the first time a Kannada film has been released in Pakistan. Everyone who have watched are raving about Yash and its action packed content.