Here is the answer behind actor Challenging star Darshan’s challenge to another celebrity on social media.

As soon as a tweet was made by Challenging Star Darshan on Tuesday morning. Fans started discussing over the reason behind their heroes tweet. Whether is it producer or any other actor who has taken a dig against Darshan over the Kurukshetra movies recent developments on audio release. Here is the real answer from the actor himself.

The actor Darshan did make a sweet gesture to all his fans, as well as the film makers. He asked all his fans to treat all the big stars and other actors from the movie Kurukshetra equally when film releases. Also requested not to make any differences or problems after the release. 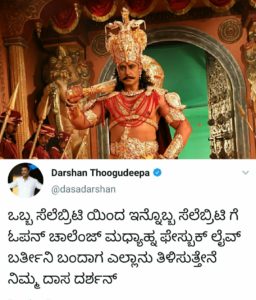