The Kiccha Sudeep’s Phantom team has been constantly giving surprises not just to its fans, but to the movie team members. Actor Sudeep comes out with a video on a birthday gift to Nirup Bhandari from the movie team.

As Kiccha Sudeep in the video just says on the eve of actor Nirup Bhandari’s birthday, the team of Phantom will be giving a gift. Here he says a word Fakira, now what that word is all about. Is it a character which Nirup to be playing in the Phantom movie besides Kiccha Sudeep or something else.

Replying to actor Sudeep’s tweet, Nirup says, This is an unexpected surprise @KicchaSudeep sir. I’m eagerly waiting for the gift. Thanks for the kind gesture.

It is known fact that the actor Kiccha Sudeep always surprises his team members on their birthday. Recently, the actors long time car driver and closed aide had celebrated his birthday with a huge cake cut by the driver. There are many such kind and sweet gestures and act from the actor to all his near and dear ones.

Now here is the gift that Sudeep informed about for Nirup Bhandari on his birthday. 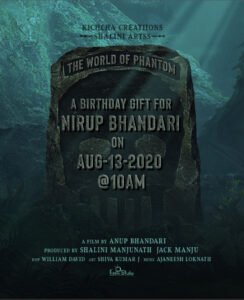