There is a good rapport between two superstars Shivrajkumar and Kichcha Sudeep in KFI, which is known to their fans as well. On Monday, Actor Shivarajkumar has released a special Common DP for Sudeep’s birthday.

As the actor Kiccha Sudeep will be celebrating his birthday on September 2, due to Covid crisis he will not be meeting his fans this year. But his fans never made the excitement level drop.

Whereas, Kichcha Sudeep’s birthday celebration has already begun on social media. Fans have made a Common DP for Sudeep’s Birthday. Notably, it was released by hero Shivarajkumar.

So, this Common DP Release event was supposed to be held by Sudeep fans on the 29 August. But on the 30 August, it was Sudeep’s mother’s birthday.

So, at the request of Sudeep, the Common DP was released on the 30 August. Sudeep has decided not to celebrate any birthday as there is still coronavirus. It is against this backdrop that he has appealed to fans.

I had the opportunity to spend a whole day with you who were coming to greet. But the current situation does not permit it. I am sorry to say that there is no ritual or event to meet all of you. Sudeep has said that I have to keep track of the health of my elderly parents, and you all. 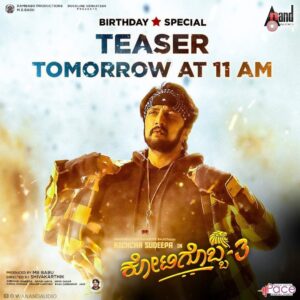