The actor Shivarajkumar has adopted an elephant named Parvati for Rs 75,000 at the Chamarajendra Zoo in Mysore. The elephant was adopted by the actor from August 19, 2020 to August 19, 2021.

Earlier, other Sandalwood actors like Darshan Thoogudeepa had adopted a lot of animals from the zoo. Actor Chikkanna, Devaraj, Srujan Lokesh and many other politicians have adopted animals and birds from the zoo.

While Actor Shivarajkumar is currently shooting for Bhajarangi 2 movie post the lockdown. The movie is directed by director A Harsha and produced by Jayanna. 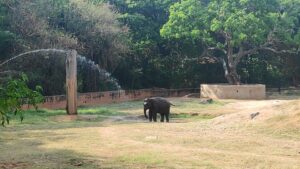 There are many Sandalwood celebrities who have followed to the list of animal adoption. It was actor Darshan Thoogudeepa, who had been a animal lover. He has adopted several animals in the zoo, so far. Also he is a brand ambassador for Karnataka Forest Department in protecting wildlife animals.

There are many other celebrities who have followed Darahan in adopting animals, as comedian Chikkanna and actor Sriimurali and many more who are doing as a voluntary service.