Actor Rakshit Shetty and music director Ajaneesh Lokhanath were issued a Non Bailable Warrant for a song plagiarism on Tuesday. Immediately, there was a buzz about images of arrest warrant spreading haywire on social media.

In regards to the news, the actor Rakshit Shetty nor music Director Ajaneesh had responded. However, the news went viral. Knowing the importance of giving a reply to the news spread online. Rakshit Shetty opens up in detail on his stand. 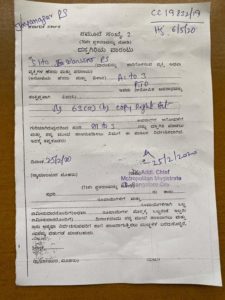 On Wednesday, Rakshit took his social media to respond to the people who were spreading this news on watsapp and social media.

Rakshit said, All these online articles started once these two pics started floating on the whatssap groups. Who started it? Who ever did, sorry you dint do a smart job. I got these pics from the initial group where it started and you have left your foot prints there brother. A big one.

This one says ‘the summons were duly served and ACKNWOLEDGEMENTS were received in court’. None of us were summoned directly nor anyone in my office or AJANEESH B studio received any letter. Who signed the acknowledgment letters then? I would love to see those signatures.

Last time when they had put a case against us (After a month of the music release but exactly a day before the premier show) their advocate contacted us and gave us the stay order for film release and took an acknowledgement personally from each of us.

We decided to fight back for what we believed was right and not budge to these. Our film release was under risk but we stood our ground. Luckily we were able to cut the song at the last moment and release the film. With courts permission, we included the song second week.

A year later when we won that case, the whole team celebrated but we did not announce it in public for we dint want the losing party to be targeted again in any way. Infact we thanked them in solitude. Court, Kacheri was a new experience for us and we got to learn new things.

I never spoke about it before for good reasons, but seems like there are many more beautiful experiences and new learnings coming our way. This time I will keep you all updated. This is going to be fun, Rakshit said.

The befitting reply by the actor on the turn up of this case looks like somethings gonna change. However, this is not a good sign for Sandalwood films, at the time when other industry are looking up for kannada movies.