Nikhil Kumaraswamy announced distribution of food rations earlier to film workers at their Union office in Gandhinagar. After concerns were raised over gathering a crowd, he has announced transferring money to the accounts of 3,000 workers.

Karnataka Television Association also suspended shooting of all television serials and reality shows from March 22 to March 31. It will be extended till the nation wide lockdown by central government is announced.

Also in addition to Rs 31 lakh for film workers unions, Nikhil Kumaraswamy has also contributed Rs 5 lakh to the television workers fund. Cheques were handed over to Ravindra, secretary of the Federation of Workers Unions today. 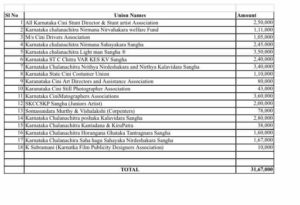 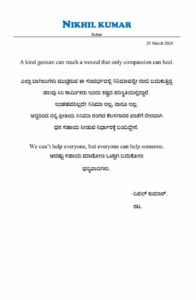 Recently, Director and Actor Pawan Kumar did raise funds for the technicians and daily wage cinema industry labours. His tweet mentioned, Just an update – 433 people together contributed – Rs. 4,58,776. Since there have been comments about why the film fraternity is not doing anything. More than half of this collected amount came from a few actors, producers and directors.

IMPORTANT UPDATE for people who contributed money in the last 48 hours.

I have been in touch with few senior members of the UNIONS and also actor Chetan (He has been extensively working in the betterment of the film workers.

I have got this information –

As per this information, the total number is – 2699

And if I have to give 3.5lakh to all of them, that is 120rs each. This makes no sense and not all of those members are in financial need.

Chetan suggested that he has a list of workers from each of the unions who fall under the BPL category.

I am asking the union heads to identify 10 people from each of the sectors who are in immediate need of funds.

If the Collected amount goes up, then more people will be added, but I have been suggested that giving out Rs.2000 to each worker and more number of workers is better than giving fewer people more money.

If you would like to add funds, please do.