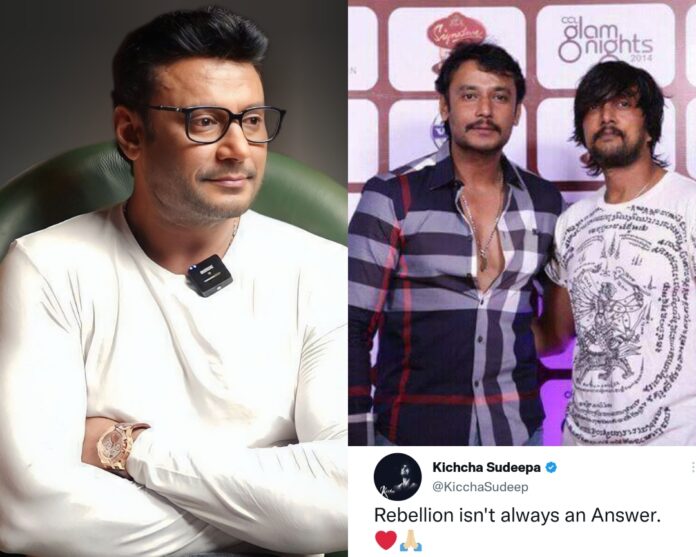 As support poured in from Sandalwood Industry for actor Darshan Thoogudeepa, after a slipper was flung at him at his Kranti film promotion event on Sunday in Hosapete. On Tuesday, Actor Kichcha Sudeep made his point about Hospete incident. The actor stated that he had to speak up even though it was not related to him.

In a tweet, Sudeep stated, “Our land, language and culture is all about love and respect. Every problem has a solution, and every solution has multiple ways of being solved. Each and every individual deserves to be treated with dignity, and any problem can be solved in a manner that is pleasant and calm. The video I saw was very disturbing. There were many others and the leading lady of the film standing there as well who were just a part of the event and had nothing to do with the rage that was prevailing at that time. Humiliating them publicly brings about questions as to whether we kannadigas known for these unjustified reactions. Is this kind of an outburst even an option.

“As far as Darshan is concerned, I agree there may have been a situation that isn’t so pleasant between him and Puneeth fans. But is this the reaction Puneeth himself would have appreciated and supported ? An answer to this is something that probably each of his beloved fans know.One silly act from one individual in the crowd shouldn’t damage the whole system called love, dignity and respect that Puneeth fans are known for,” he said. 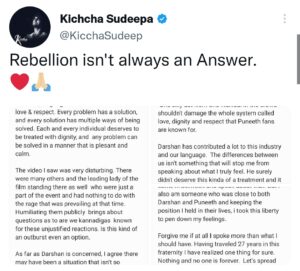 “Darshan has contributed a lot to this industry and our language. The difference between us isn’t something that will stop me from speaking about what I truly feel. He surely didn’t deserve this kind of a treatment and it disturbed me as well. The Kannada industry and the people of our land are known for good reasons for which kannada and Karnataka are respected across all states. We shouldn’t be spreading this kind of message. Rebelling like this isn’t an answer or a reaction towards any situation,” Sudeep mentioned.

He said, I do understand there will be differences between actors, fans etc and I’m no one to come in between and speak about that. But I also am someone who was close to both Darshan and Puneeth and keeping the position I held in their lives, i took this liberty to pen down my feelings.

He added, Forgive me if at all I spoke more than what I should have. Having traveled 27 years in this fraternity I have realized one thing for sure. Nothing and no one is forever. Let’s spread love, respect and get the same in return from all. That’s the only way one can win anyone and any situation. 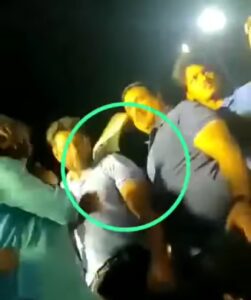