He stated, “Street Light Productions, Yes, another cinema production house from our family. As you all know, already we own a Production House by name D Pictures, headed by me which was launched in the year 2008 by Late Parvathamma Rajkumar. Circus was our first venture and till now we have produced 9 quality films and twice our banner has won the Karnataka state award for the films Haggada Kone( 2014) and Aa Karaala Ratri (2018).”

To produce more quality films, now we have launched Street Light Productions headed by son Tharagan Dayal. There is an emotional reason for keeping this name and that is nothing but the Street light has played major role in my life in my childhood which was filled with poverty, Dayal said.

He added, We assure you to deliver more innovative and quality cinemas from this new banner and we request you to continue your support and love. 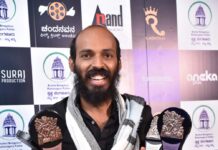