The movie is produced by late Puneeth Rajkumar under the banner of PRK and directed by D Satya Prakash, the film is slated to release worldwide on May 5, in India and across 240 countries and territories on Prime Video.

The satirical comedy is a modern-day reflection of human emotions and social challenges that revolves around the journey of a director, played by Nataraj S Bhat, who decides to hold an audition for his upcoming movie, Man Of The Match. With people coming in to be a part of the project, the director gives them different situations to the artists to enact, creating conflicts between them.

Raising the excitement, the trailer ignites the curiosity of how this unique film will be made and the hurdles the director faces during the making.

“Man Of the Match is a film close to my heart and always will be. I was in talks with Puneeth sir for a while and then one day, after the first lockdown, I shared the idea of the Man of the Match story. He immediately liked it and said it was a very bold idea and at the same time he said it is a difficult one to execute but we now must take such a step towards new & this kind of filmmaking for a newer generation, and he agreed to back it,” said director D Satya Prakash.

He further added, “I hope that the audience connects with the film. It has amazing punchlines, gripping narrative and laughter, along with some food for thought. I am thrilled with the film’s launch on Prime Video and will reach audiences in over 240 countries and territories.”

“The reason why I am a part of this film is because of the PRK Productions and also for its unique concept along with being able to work with an exciting cast and the award-winning director, D Satya Prakash. The experience while shooting for this movie was very unique, and I instantly connected with the story and my character. It was technically challenging for me in terms of performance & new visual format understanding. I hope the fun we had while making Man of the Match is felt by the audience and they love it back,” added actor Nataraj S Bhat, who played the lead role in the film.

The movie is produced by Late Puneeth Rajkumar’s PRK Productions and directed by National Award winner D Satya Prakash. While the cinematography of the satirical comedy is done by Lavith. 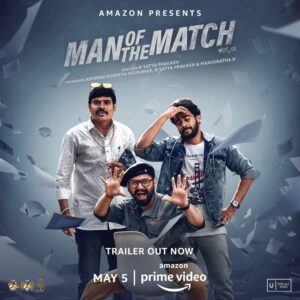