The telugu movie ‘Anaganaga O Athidhi’ poster was launched by the popular Telugu Director Vamshi Paidypally. The shooting of the movie had commenced in September and now it is in the post production stage.

Director Dayal Padmanabhan says, “Though it’s my 19th film as Director, it holds such mixed feelings as I feel like it’s like my first film. Every film of mine, I give it my all – my passion and effort grow every passing day.”

“This film has been produced by Allu Arvind under his OTT platform AHA to be premiered on this Diwali. After watching the final edit, he is planning for theatrical release also,” said Dayal.

He added, This is the fortune and blessing to have gotten the opportunity to take a work of Kannada literature (play) to another language.

In the movie director Dayal has retained the artists Naveen krishnaa, Veena Sundar and Manikanth Kadri to be part of project. Also the tamil version of Aa Karala Ratri to be remade and will be produced by Ramesh Pillai later. 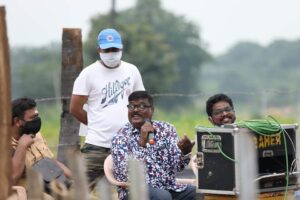