At the time when the Kannada language in Karnataka has been facing threat from all around the corners. The Kannadathi serial telecast in Colors Kannada has given some hopes among the public on the linguistic values.

Adding a more popularity to the show Kannadathi, a couple hailing from the last village in the borders of Karnataka and Maharashtra have named their daughter ‘Kannada’ to mark their love for the language as well as the show.

The couple who hails from the stronghold of Marathi speaking population were inspired by the Kannadathi after which they decided to name their daughter Kannada. The duo requested the channel for naming suggestion.

However, the stage of Anubandha Awards witnessed touching moment as the just born baby girl was named Kannada suggested by music composer Hamsalekha, the Nadabrahma of Kannada film songs.

However, for Siddugowda Patil, the father of Kannada the moment was the proudest moment of his life, “We wanted to name our daughter Kanasu after Nagathihalli Chandrashekhar’s daughter name until the Kannadathi serial started airing. My wife who has been the fan of the serial and its efforts to promote Kannada. We decided to name our daughter Kannada and that was fulfilled on Anubandha Awards stage,” he said.

Siddugowda Patil, the Chief Executive Officer at Samardak Seva Mandal, a school where more than 5,000 students are studying in Nippani of Belagavi district says, “Our place is mix of both Marathi and Kannada speaking population as the name itself says ‘Neeru-Pani’ bilingual words for ‘Water’ joined together to mark the linguistic harmony in this area, “he says.

Continuing about his decision on his daughter’s naming he said, “There is an unforgettable contribution and influence of Kannada writers in our area. After our daughter being named Kannada, people here are very supportive and have been hailing our move,” he said. 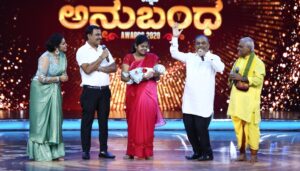