For television stars of Colors Kannada, it was a dream come true moment to have the superstar of Kannada Film Industry on stage addressing them, as Superstar Kiccha Sudeep graced the Anubandha Awards-2020 stage to celebrate his 25 years in the industry.

The Bigg Boss host who is an icon himself for his unstoppable passion for film making, will be celebrating his successful journey with artists of Colors Kannada at Anubandha Awards-2020 held at Innovative Film City near Bidadi.

On Sudeep completing silver jubilee in Sandalwood industry the choreographers’ group led by Tarak will perform a special dance on the song written and composed by Colors Kannada team describing his versatility in film making and his journey so far.

The 7th edition of the Anubandha Awards will also witness the stars of the Kannada industry descend on the red carpet to celebrate and honour the excellence in this industry.

Celebrities such as Sri Murali, Hamsalekha, KGF fame Bhuvan Gowda, thespian Doddanna, Veda Krishnamurthy, Aditi Prabhudeva, Darling Krishna and Milana Nagaraj among others, all gathered under one roof for the gala night.

Sudeep, one of the most talented actors in Kannada cinema said, “25 years in the film industry was a big dream come true for me. These years have been full of excitement, hard work, and various ups and downs and am extremely thankful to all my fans who have made me what I am today.”

The Dabangg 3 actor also emphasised on the hard work and passion that the actors put in to bring smile to the faces of its viewers. The superstar was seen fulfilling the wishes of superstars from the COLORS Kannada family with his great gesture. His impressive body of work speaks for itself and justifies him to be regarded as one of the best actors.

The Bigg Boss host expressed his helping hands to the three artists for their passion for acting by recognizing them on the Anubandha stage.

Carefully crafted as a high-voltage celebration of happiness, Anubandha Awards 2020 is a common ground for all the members of COLORS Kannada family to come together. With an ensemble of stars from the Kannada television and film industry, the event promises hours of fun and frolic, never seen or heard of before.

The main highlight of the evening will be the awards that celebrate the carefully fostered relationships that bind COLORS Kannada’ superstars to its viewers.

The much-awaited award featuring a magnificent line-up of mind-blowing performances and will be televised on January 15, 16 and 17 at 7.30 pm only on COLORS Kannada and anytime on VOOT thereafter. 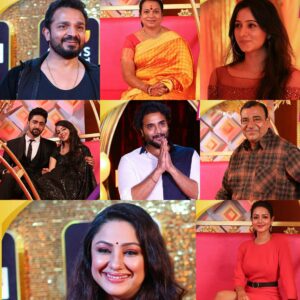