His career graph as an actor and director has been on an upswing for years now, but when it comes to M G Srinivas, it can never be said that ‘there is no looking back’. He has stayed firmly rooted and neither has the former RJ’s love of writing diminished nor his determination to be a creative director. Birbal Triology is his new muse which will hit the screen soon.

In an Interview with Cini Mirror, The actor, writer and director speaks about his ideas and upcoming movie ‘Birbal’ Triology a first Kannada film with 3 parts. Excerpts

How and when did the idea to start Birbal – Trilogy began?

My second directorial venture ‘Srinivasa kalyana’ (SK) was a romantic comedy. After the success of ‘SK’, I got a couple of offers to make films in the same genre. But as a film maker I’m constantly on the lookout for new subjects. So it was during the search for one such subject that I chanced upon a story that instantly grabbed my interest. Today, it has shaped up as ‘Birbal Trilogy’. It is an experimental cinema and we hope to strike the right chord with the audience, who is also constantly looking to support fresh content.

Everyone in the movie business claims that their movie to be made with a new theme for the first time? In what ways your movie is first of a kind?

We rather let our work do the talking than make tall claims. However, having said that, I can safely say that we have experimented in quite a few departments and stretched our creative capacities to the maximum. For instance, ‘Birbal’ is the first trilogy in Kannada cinema. Content is the king of course, but presentation matters too. So we have roped in some of the best technicians in the business. VFX has been done by Canada based Mysoorean Yash Gowda. He has worked on Hollywood films like ‘Transformers’ and ‘Pirates of the Caribbean’ among others. Reputed international colourist  Walter  Cavatoi has graded the film. In fact, his work in ‘Birbal’ was featured by Colour Society International. Further, we roped in India’s number two illustrator, Ankur Patar to design our posters.  Bollywood music directors of ‘Sonu ke Tittu ki Sweety’ fame Sourabh-Vaibhav make their Sandalwood debut with our film.  We have also used scribble effect in our song and time freeze effect in a scene.

Many good movies in Kannada are not getting a wide publicity and screen space? Tell me your idea in reaching out to a larger audience?

‘KGF’ has opened the market for Kannada film makers. The film’s success has come as a shot in the arm to many experimental and new age film makers. The focus has shifted on our industry and hence it has become easier to put our films out there for a larger audience. If your content and making are good, there is no stopping you. This development and the positive response our trailer has received has prompted us to release our film worldwide. In India itself , we will be releasing in Mumbai, Pune, Chennai, Delhi and Hyderabad on Jan 18.

As an actor, writer and director don’t you feel overburdened in carrying out the entire task?

On the contrary, I enjoy multitasking! In fact, the director in me knows the strengths and weaknesses in the actor in me. This in turn helps the writer in me to sketch characters that suit my persona the best.

What have you learnt from your earlier movies in content, quality and entertainment wise?

We have to make movies keeping the current trend in mind. Also through my experience I have understood how to work with both big and small budgets. I am also learning to work around the commercial aspects that make a film tick. The biggest lesson however, has been with respect to film promotion. I have come to realize that promoting a film is as important as writing and executing one. I am also learning the business of film making, most importantly all about theatre set ups.

As an audience what would you expect in a Kannada movie?

Any plans of directing a star hero or newbie in coming days?

Why not? But for me script is the real hero. So when a script demands a star, I will surely look forward to casting one. Likewise, when the story requires a newbie to play the part, I will hunt for fresh talent.

What do you like to see yourself as if you have to choose any one Actor, Writer and Director? Why?

I am greedy for knowledge, so I will continue to learn from my outings as a writer, director and actor. There is so much to realize in all these three capacities and I will remain a dedicated student for life!

As a story writer what made you write this kind of script that has a Trilogy?

For a long time, I have been dabbling with the idea of creating a character based series on the lines of Sherlock Homes and the script of ‘Birbal Trilogy’ seemed the perfect launch pad in this direction.

Why should one come to watch Birbal?

It is an experiment worth viewing.

Will be working on the second and third installments of ‘Birbal’. This apart I will be starting two projects as an actor. 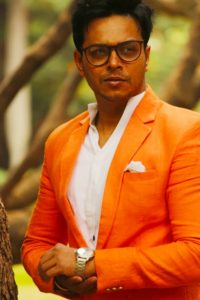