This Puneeth Rajkumar and Ashiwini Puneeth Rajkumar produced movie Mayabazar 2016 under the banner PRK productions was a long wait to audience. Glimpse of this movies teaser did not reveal much about the plot. But trailer gives you a packaged entertainment.

While the trailer that released of the movie Mayabazar 2016, says a lot on the movies theme. It has a lot of fun filled elements with a take on demonetisation, as the title itself has a story that takes place in 2016. 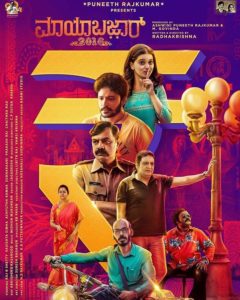 There are a list of well established artists who have given their best for the movie. This trailer has all the entertaining facts and some thrill for the audience. Trailer speaks about the toll on demonetisation before and after it happens.

Mayabazar 2016 movie is a drama directed by Radhakrishna Reddy and produced by Puneeth Rajkumar under PRK Productions banner while Midhun Mukundan scored music for this movie.

The movie has many artists such as Raj B Shetty, Vasishta N Simha and Chaitra Rao are playing the main lead roles along with Prakash Raj, Achyutha Kumar, Sadhu Kokila, Sudharani are seen in important roles in this movie. Also there is a special dance number from the actor Puneeth for this movie.