The bold scenes in a song in which Dimple Queen Rachitha Ram was seen made a news overnight. Now again, after I Love you movie the actress is back in a bold character in Ek Love Ya movie.

Recently, after I Love You movie was released it ran a houseful and became a hit. The movie turned to be a hit because it had all the elements from lead actor Upendra’s cult movies dialogues and story. Also one song with Rachitha Ram and Upendra had been a talk of the town for its sensuous content. 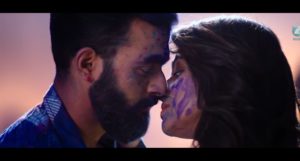 As the movie hit the theatres, there were many fans of Rachitha who were shocked to see her from girl next door image to hotress image. However, the actress did apologise and said in a media that she should have not done that role. Now she is back with a bold character as seen in Prem’s directorial movie Ek Love Ya produced by Rakshita Prem.

In the teaser, she is shown as a cool and modern girl who smokes. Also seen lip locking with the lead debutant actor Raana in the end of the teaser. Hope, the actress knew what her role demands for the movie before it is released.

Now, the actress has got a huge fan following for her unique roles that Rachitha has been taking up. Also she has a strong followers after her hot and bold scenes in the movie I Love You. Also Ek Love Ya teaser says a lot about the movie and it would attract youngsters for its masala teaser.