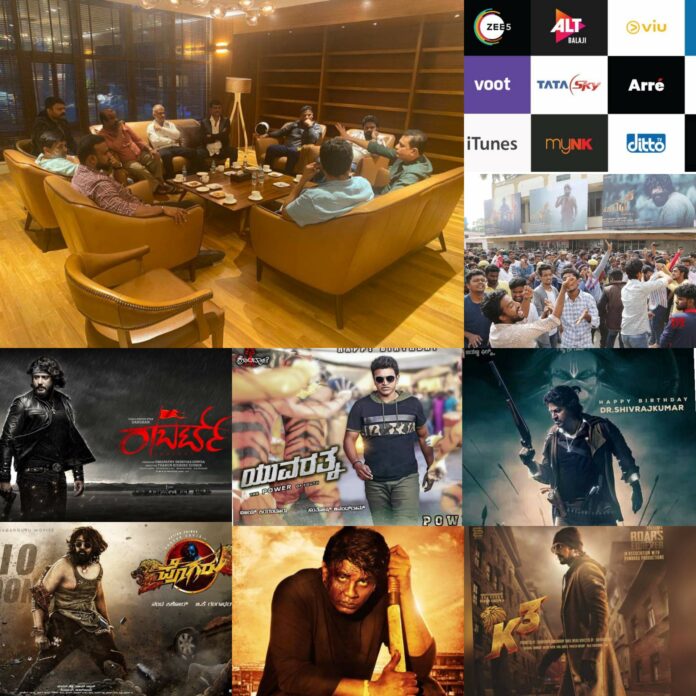 Top Sandalwood producers, those who are making or have already completed making films with big stars, have been meeting regularly for the last six months.

After the meeting, a barely concealed warning went out to the single-screen exhibitors, those aligned with the ‘Mahamandala’ headed by Odugowder. These producers have started making noises about releasing these big films directly on OTT platforms.

One of the producers in the meeting spoke to CiniMirror on condition of anonymity.

Q: Why are the producers worried about Mahamandala’s idea of revenue sharing?

A. Films are not produced by corporate entities in Karnataka. Producers have borrowed from the open market and are severely cash-crunched and under tremendous pressure from last 6-7 months. Interests on loans taken to make films have crushed us.

In this scenario, the Mahamandala has taken a stand to release movies only on percentage/revenue-sharing basis. It is their threat not to release films in their theatres otherwise.

We producers understand that exhibitors are under losses. I won’t blame them for asking this. All that we producers are asking for is to follow the system that has existed for the past 50 years.

Q: What was the meeting between producers and theatre owners all about? (An earlier meeting).

A. Recently, a meeting was held at the Gangaiah Thimmamma Choultry. There were 50 theatre owners and around 10 producers. Representatives of the Producers Association were present too. We did not bypass them. They (exhibitors) made their stand and producers spelt out our problems.

Q: What did you request the Mahamandala?

A. We asked them to prepare a list of movies that were either shot before Covid or which had begun shooting before that. These films have to be given priority.

If production work on these movies are not completed, there won’t be films to release in theatres. We are completing our films in these challenging times. So at-least these movies should be allowed to be released following the old system (rent).

Even if we start now, it will take 2-3 months of discussions to arrive at a revenue-sharing model. What would be the percentage theatres get, in what time frame and several other details have to be worked out. It can’t happen overnight. Both the producers guild and theatres guild have to come to terms and sign on dotted lines. Let the new sharing system start with movies, apart from the 10 which are ready for release.

Q. Why are big-budget producers afraid of the revenue-sharing system?

A. An actor’s movie which would make Rs 20 crores in the rent system will fetch only Rs 13 crore for the producer in the revenue-sharing system. It will also depend on the ratio we agree upon. Suppose we do sharing on 60-40 ratio or 70-30 ratio, our share on a Rs 10 crore box office collection will reduce by around 2.5 crore.

Q: What is the percentage theatre owners are expecting? Do they want it to be similar to multiplexs, which is 50-50 percent?

A. When we calculate the rent now, it already comes close to 18-20 percent of the maximum gross collections of a theatre. But still they are under losses. I know it is true as producers also have knowledge of theatre business.

Only films of stars generate enough box office collection to be able to pay rents. There are poaround 10 such films in a year. Another 4-5 films have good runs. So in a year there are no more than 15 films which make money. And most of these 15 films run in multiplexes. The big movies that reach the B and C centres are around 5-7 a year.

Around 60 percent of the theatres are with the Mahamandala. We can’t release films in just 40 percent theatres.

Q. What was discussed about the direct OTT release?

A. A few OTT platforms have been sending us feelers for a while now. The 10 of us have decided to take a joint stand that we will go for OTT release if we get back our investment.

If the OTT platforms are paying a fancy price any producer would be ready to release. The truth is far from it. There are other avenues. Recently, Tamil actor Vijay Sethupathi’s movie was released on an OTT platform on Pay-per-View model. The investment was recovered in just 4 days. On the 5th day the film was released to a normal OTT platform (Where it is free for subscribers). On the 35th day the movie was on TV. In a similar manner, the Telugu movie ‘Solo Brathuke So Better‘ made Rs 32 crores. It was in theatres for just one week. From the second week, it was on an OTT platform, which charged Rs 150 per view.

Actor Gopichand’s movie was purchased for Rs 25 crores, and it will be aired soon. For Kannada movies, they may ask us to go for a revenue-sharing model. Lots of things are happening and various kinds of offers and models are on the table.

A problem we encounter is that some producers cannot give complete financial details. Our movies are made in the unorganized sector. OTT platforms require everything in black and white with TDS and GST.

Q. Only a few of you producers are opposing the revenue-sharing system then?

A. I know the problems faced by theatre owners. I have spoken to a few of them. Around six movies of big stars are released in theatres in a year. Only these films get released in 400 screens. The next big films get around 250 to 300 screens. In Mandya there are four theatres. So on an average, each theatre gets three star movies a year. Even if each run for 3-4 weeks, they get a percentage share for only 3 months.

For the remaining 9 months you have only small budget movies. Sharing business is good for them as producers get bigger share than in rental system. In effect, theatre owners will take from the big films and give it to small films.

I would have accepted their plea, if there were more than 25 big budget films released in a year.

Q. What is the final call?

A. In the meeting of the 10 producers, we decided to discuss with the concerned movie directors and heroes if they have any objection for direct OTT release. There should not be any confusion or hassle over this later. Producers would have invested their money, but for the technicians and actors, it is their career. We will meet again after this input is in place.

I would not take their names for obvious reasons, but out of all the producers, three have agreed and two of them have wholeheartedly said they are 100 percent ready for a direct OTT release. They have also said that they have discussed it with their lead stars. Another producer has also agreed, but said he would once again confirm with the team.

One more producer said he will release his film even with a minimum number of screens but not go for revenue sharing. He gave the example of Kirik Party which released in 75 screens but was a blockbuster. Satellite rights, OTT and Hindi dubbing rights is also assured for star films.

Q: Which are the movies releasing soon?

A. Producers of the top four movies have decided on their respective release dates. Two other films are also ready for release. There won’t be any clash at the box office and all these movies will be released in a organised manner.

There are as I said, at-least a couple who would release directly on OTT if given a fair price.

Q. So the producers are all set and happy to release their movies?

A. Many producers are disappointed with the GST. Cinema is an unorganised sector, it cannot be done with GST everywhere.

When producer say they would rather run canteens in theatres than produce films, they are not joking. More time is spent in auditing accounts than making movies. 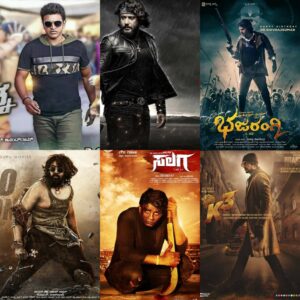