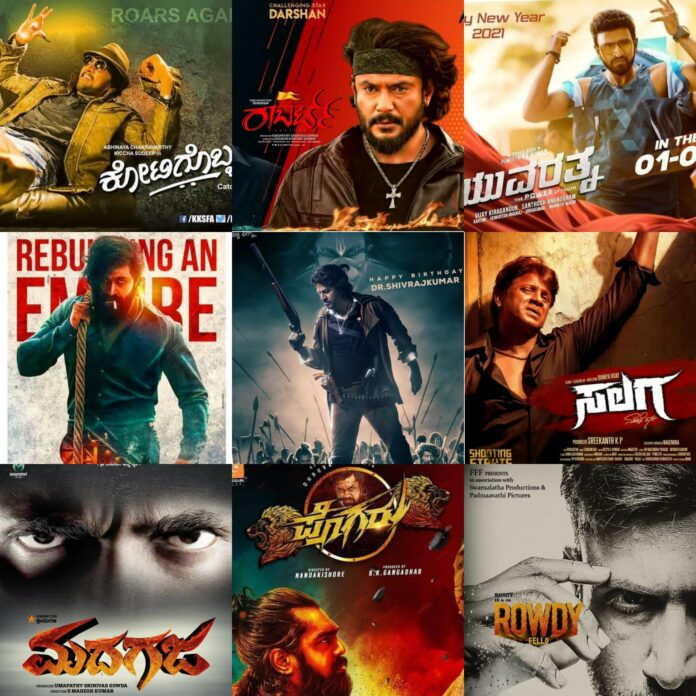 In the year 2021, Sandalwood stars have a line up of cinemas ready to offer the Kannada cine lovers. Fans have high expectations from all upcoming big star films and are eagerly waiting to hear an official update regarding the film release. Meanwhile, fans are also expecting some announcements on their favourite actors movies.

The movie marathon usually starts from Sankranti festival on January 14, with big films like Nanda Kishore’s ‘Pogaru’ movie starring Dhruva Sarja is all set to release. But the makers are yet to announce the dates officially.

Another film to be released in the month of February according to sources is Dunya Vijay starrer ‘Salaga’. Produced by Srikanth, the film also is the directorial debut of Duniya Vijay.

If everything goes right, Fans can get to see Challenging Star Darshan starrer Robert, in the month of April. It was one of the most anticipated films of last year, and fans of the Challenging Star are looking forward to see their favorite actor on big screen.

But producer Umapati has decided to make an official announcement for Robert’s release when theaters allow 100 per cent audience.

Since the Prashanth Neel’s magnum opus, KGF Chapter 1 was released. The entire nation is eagerly waiting to see Rocky Bhai aka Yash’s KGF Chapter 2 in theatre. Bollywood actor Sanjay Dutt and Raveena Tandon are also part of the KGF franchise. The movie will see a release only post April 2021.

Another long-awaited film ‘Yuvarathnaa’, starring Puneeth Rajkumar will hit theaters on April 1, as the makers have official announced on the New Year. The combination of Power Star with director Santosh Anand Ram has created much anticipation in the audience after Rajkumara movie.

After completing the shooting of Siva Karthik’s Kotigobba 3, the producers are yet to make the announcement of release date. Meanwhile, the actor Kiccha Sudeep is busy with his next film, Phantom movie shooting.

Century star ShivarajKumar is also gearing up to give fans a handful of films this year. The movie Bajrangi 2, directed by Harsha, has completed the shooting and also ready for release. Currently Shivarajkumar is shooting for Vijay Milton’s Shivappa.

Looking forward to the release of the Upendra starrer ‘Kabza’ movie directed by R Chandru. The movie still has 40 percent of the shoot to be completed, which will see a release only by year end. Also, Roaring Star Srimurali movie Madagaja team is nearing completion of shoot which might be a Dasara or Diwali release.

Meanwhile, the actor has announced his next film, for which Prashant Neel’s story is there and directed by Dr Suri. The film will be produced by Vijay Kiragandur under the banner of Hombale Films.

One more project mentored by Prashanth Neel is RJ turned actor Rohit, starrer Rowdy Fello movie. The team has completed 70 percent of its shoot and has scheduled the remaining portions in January and February. This will also see Rohit debuting as a director, which is bankrolled by Dia movie producer Krishna Chaitanya.

Whereas, Actor Ganesh, who started shooting Mahesh Gowda’s Triple Riding post lock down, is awaiting the release of the film this year. The Golden Star will soon be part of the shooting scheduled of Yogaraj Bhat’s Gaalipata 2. The movie also stars Digant and Pawan Kumar in the lead. Also Ganesh will be seen Simple Suni’s “Sakhat”, both come together after their hit Chamak movie.

Fans of Rakshit Shetty are already waiting for the 777 Charlie movie. Kiranraj’s film is setting new expectations with every update and ia in its final stages of shoot. The shooting of the film ‘ ‘Saptha Sagardaache Yello’, directed by Hemant M Rao under the Pushkar Films banner will begin shoot in a month. Actor Rakshit Shetty will also be seen in the film directed by Rahul PA.

He will be teaming up with Rishab Shetty for Kirk Party 2 and is getting ready to direct. Meanwhile, Rishabh Shetty is one of Sandalwood’s busiest director, actor and has two projects

Garuda Gamana Vrishaba Vahana directed by Raj B Shetty is gearing up for the release, along with Bharat Raj’s Hero movie.

The actor is currently shooting for a film called Harikathe alla Girikathe. In terms of direction, he has Anant Nag starring Rudraprayag and Kirik Party 2. 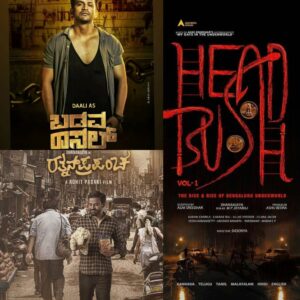 Actor Dhananjaya will also be seen in Shivanna’s Shivappa, another film with Dhananjay’s production banner Badava Rascal has completed its shoot. Also seen in Yuvrarathna and Ratnan Parpancha movie.

He will be part of Allu Arjun’s ‘Pushpa’ movie according to media reports. Also has a Tamil film to shoot.

Two actors who made news in 2020 – Prithvi Amber and Darling Krishna are also having more than 3 projects for release this year. Actor Nikhil Kumarswamy also has announced about his movie Rider, which is yet to complete the shoot. The popular cinematographer Karm Chawla turns director with ’10 Movie’, a sports drama starring Vinay Rajkumar.

There are also debutants in Sandalwood this year with movies like Shiva 143 with Dheeran Ramkumar, which is a remake of telugu hit RX100. Also Yuva Rajkumar movie titled Yuva Ranadheera Kanteerava, the film, which is a historical drama, will be helmed by Prashanth Neel’s associate Puneeth Rudranag.

After debuting with movie Amar, Junior Rebelstar Abishek Ambareesh to star in director Suri’s Bad Manners. While actor Sathish Ninasam, has a film ready to release with Godhra(Earlier Titled) and 3 under production movies Dasara, Petromax and Matinee. 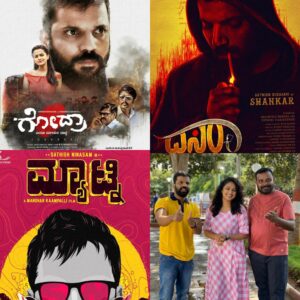 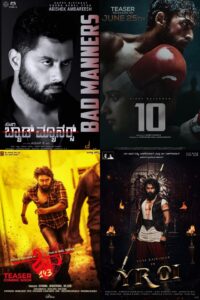 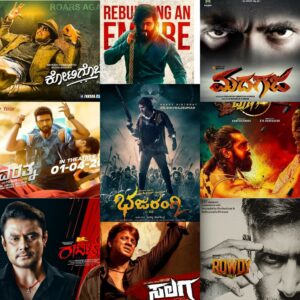