Here’s some good news for fans of Challenging Star Darshan, as well as theatre owners who are looking for a big film release. “Long awaited Roberrt movie will see a March release and in theatres only,” confirms DBoss aka actor Darshan Thoogudeepa.

Darshan-starrer Roberrt, which is one of the most anticipated films of the year, is likely to have a 2021 March release. Directed by Tharun Kishore Sudhir and produced by Umapathy S Gowda, the film may hit theatres on March 11 or around that week.

The team, which is planning to release it in Kannada as well as Telugu, feels that the March will be a suitable time.

On Sunday, Dboss speaking to his fans through his Social Media account regards to his birthday this year.

Actor Darshan Thoogudeepa said, “I will not be celebrating my birthday this year too with all my fans due to Covid. Also i dont want anybody to come so far to wish me. I will not be at my house from 15 February to 18 February. So please dont travel so far, and also spend your savings or money to your family first. Later you can help others in trouble. The year 2020 had witnessed financial breakdown and many were jobless. So i dont want anyone to spend your money on anything else rather use it for your family.”

Meanwhile, many fans questioned about Roberrt movie release date and whether the movie will be releasing on OTT platform.

Coming to OTT platform, Darshan says he is against releasing movie in OTT platform after such huge investments are made by the producers. He says, “When schools, colleges, market and marriage halls are open in which huge crowd is gathered. But why aint theatres opening.  Reason is 5G network, As Ambanis have started this it is a very big scam according to me. They dont want people to go watch movies in theatre, they want people to use internet to watch movies on phobe or television. As they  are entering market to make money with people backing them. So the movies are streaming on OTT platforms.”

“The producers have invested crores of rupees in the movie to entertain people watch in the theatres not on the mobile phone. If so a tele-serial would have been made, why a movie should be made to release on OTT platform. No matter what seating occupancy we have, even if it is 25 percent or 50 percent. The movie Roberrt will be released in theatre,” said Darshan.

The release of Roberrt movie trailer will be official announced, along with Telugu updates will  be given from 26 January. As the telugu version of Roberrt has completed with all the dubbing portion.

Roberrt was initially supposed to get released on April 9, 2020. But the date got pushed ahead due to the pandemic. Since the film is ready, Roberrt team are looking at releasing it.

The movie Roberrt is bankrolled by Umapathy Films, has created a frenzy with its posters, first look, and teaser. Also the team has released the merchandise for fans. The fans are excited to watch Darshan featuring in different shades.

Check out the video of Darshan Thoogudeepa on CiniMirror YouTube channel. 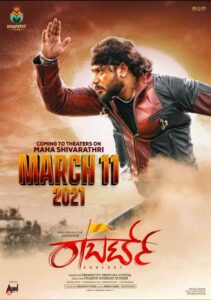