Director Satya Prakash had recently announced that his next movie title will be released on March 18. Also a poster with a match box and sticks were released from the team asking the audience to guess the title.

Now the news is that,  Man of the Match is said to be the title of the movie.

According to reports, The reports claim that Satya Prakash’s next movie is titled as Man of the Match. This movie title too is different from his previous two movies title. His debut movie as director was Rama Rama Re and his second movie Ondalla Eradalla won State and National Award. It was a social comedy drama movie written and directed by Satya.

While Satya Prakash has always been known for his films with exceptional titles and different stories. Director Satya Prakash, who always had built curiousity about his last two films, will be releasing his next movies title on Thursday.

The movie will be produced by Mayura Motion Pictures owned by Manjunath Dasgowda and Satya Pictures banner.

According to reports, Actors Jayaram, Dharmanna Kadur, Nataraj and others will be in the cast. Nobin Paul and Vasuki Vaibhav will be giving the music and Lavith will be the cinematographer. Almost all the technicians are working with Satya who have been part of his debut movie Rama Rama Re. 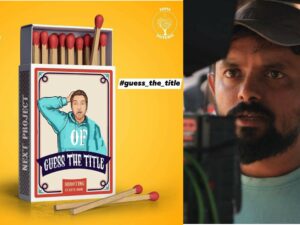