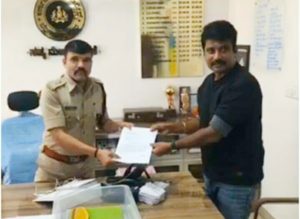 After the release of his latest film ‘The Villain’ with biggies Dr Shivarajkumar, Kiccha Sudeepa which has got mixed reviews but has got huge profits to the makers. However, the director Prem has been receiving strong criticism from the social media trollers.

The filmmaker is being criticised for his direction and the storyline of the movie on social media. Owing to which he has reportedly filed a complaint against them with the police.

When the matter turned to be too abusive against his family, Prem has decided to take legal action against people who spoke against him. He has reportedly filed a complaint at Upparpet police station today and requested SP Ravi D Channannavar to take the right action against them.

According to reports, Prem said that he would not mind people criticising the movie, but they don’t have the right to talk about his personal matters. He also added that he is very disappointed and hurt for the things people have said.

However, now we have to see how the fans of Superstars who trolled him would react to the complaint. Would they delete their posts and behave sensibly from now on has to be observed.