The State Government of Karnataka requests Power Star of Sandalwood Puneeth Rajkumar to be the brand ambassador of Chamarajanagar district. Thespian Dr RajKumar was born at Gajanur in the same district.

The youngest of the son of Dr Rajkumar to be the brand ambassador for Chamarajanagar district. District in-charge minister Suresh met the star at his residence on Saturday. The minister made a request to the actor to be part of it. Actor Puneeth Rajkumar readily agreed to be part of it.

This is not the first time Karnataka Government is approaching Powerstar Puneeth Rajkumar for government-related works. He is one of the popular stars in Kannada cinema and his image would change the district. The actor is also a role model for many youngsters in the state. Through his movies, he has won millions of heart.

Karnataka Milk Federation(KMF) has actor Appu fondly called by people is also the brand ambassador since December 2009 when then KMF president Somashekar Reddy roped him in. The late thespian Rajkumar, father of Appu also had endorsed Nandini brand in the past to protect the interest of dairy farmers in Karnataka free of cost. 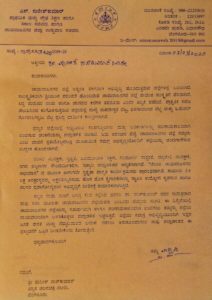