The new video shared by Actor Kiccha Sudeep from his ongoing shoot of Phantom movie makes one feel intriguing and gives chills. However the actor has clarified that it is not a horror movie.

It was overwhelming. Keeping the excitement alive, Kichcha Sudeep has unveiled another clip titled ltTheWorld0fPhantorn’ on his twitter handle.

We would request the media to help give maximum coverage and enable us to reach out to more people.

About The Phantom Clip

`The World Of Phantom’ shows Kichcha Sudeep entering a dense forest as he lights up his way with a torch. The background music by Ajaneesh Lokanath will have a voice amplifying the scene, suggesting that the Vikranth Rona, enters the world of Phantom’.

This is not an official teaser but a glimpse of what is in store for the audience. The art director Shivakumar has splendidly designed the sets. It garnered a lot of appreciation in the first glimpse, and it can be witnessed here too.

Kichcha Sudeep’s crew cut look, beard, and the way he stylishly carries off the look adds panache to the character.

We have attached a few high definition snapshots to be carried out in your esteemed newspaper. The cast will soon be introduced to all of you.

Currently, the crew is shooting at Hyderabad, and is the first big budget film to be shot in the entire country post the covid situation. All necessary precautions have been kept in place, with a seven layer medical checks designed specially for the shoot. 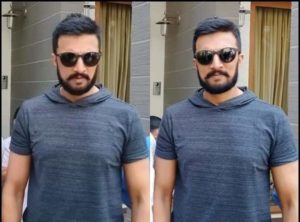