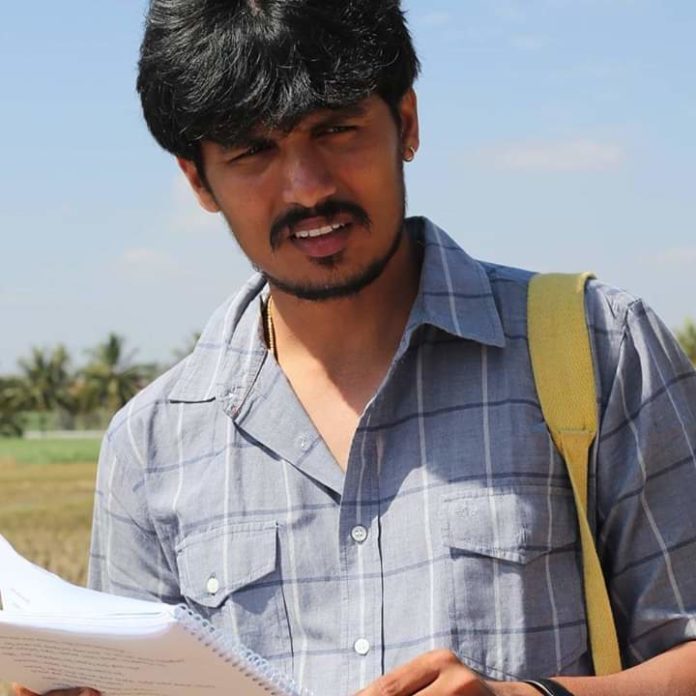 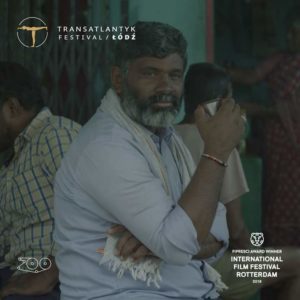 After Kannada story writer and director Ere Gowda was accused of sexual harassment by a woman who worked under him, the producers of Balekempa, Zoo Entertainment have withdrawn the movie that would have been his directorial debut.

There was an social media post online of sexual harrassment against ‘Thithi’ movie story writer Ere Gowda from a women who wished to stay anonymous. The post of #MeToo is as below.

“During the senior years of my masters, I felt a growing connection to the world of cinema. I started going through the works of the contemporary filmmakers in India. Thithi was one of them. I enjoyed watching it. I was looking for a mentor. I contacted Ere Gowda, the screenwriter of Thithi, on Facebook. He did get back to me with his contact number and asked me to let him know when I am in Bangalore.

After finishing my studies I was deciding whether to move to Bangalore or Mumbai. I could not afford the rent in Mumbai. So I moved to Bangalore. A friend helped me out with the stay. After settling in a bit I contacted Ere. He said he is around and we decided to meet up near the Sankey Tank. It was great. He talked about how he came up with the characters in Thithi, about how much he enjoys putting himself in their shoes and making different personalities interact. Inside me, I was overjoyed. I had been craving to come closer to the process of screenwriting and I saw a door to that world through this person. We met again at the Sankey Tank. He told me about his difficult childhood, narrated various stories from his village. I felt like I could connect to him, relate to him.

On a certain occasion, Ere expressed that he felt sexually attracted to me. I came up with a few excuses and went back home. I wasn’t sure if I should continue meeting him. Then I talked with a few friends. I talked to myself. I thought that maybe I shouldn’t run away just because someone is attracted to me. I decided to talk this out with him. We met. I told him clearly that I am looking for a mentor. I am looking for somebody to learn from. I am not interested in any romantic ventures in my life at the moment. He seemed to get me perfectly well.

After a few days he mentioned that he is going to Byadarahalli to finish the on site sound recording work for his upcoming film Balekempa. He said that it is going to be just him and the sound recordist. They will be staying at his in-laws place in the village. He asked me if I am interested in tagging along. I was interested. But I was afraid as well. I didn’t know whether to trust him. So the day he was leaving I made up some excuse. I decided to take a morning train the next day and check out the place myself. If I did not feel comfortable I could take the train back on the same day. I went there. I met his mother-in-law and the sound recordist. I felt comfortable. We saw Balekempa. I liked it. He said that he will be going to Goa to finish the edit and said that I could come along to watch the process if I was interested. The recordist, Ere and I used to have long conversations and walk around the village. Ere was working on an application for the Ted talks. He asked me if I can help out with it.

The day after we left Byadarahalli was the last day of submission. We still had some work left to do on that application. He said that we could go to his friends place to finish it. He mentioned that the friend and his partner live there and we could have dinner with them. By now, I had started trusting him. We went there. There was no girlfriend. I made myself a cup of coffee. Sometimes coffee induces anxiety in me. I was suddenly feeling very anxious. Ere and his friend went to play table tennis. I wasn’t interested. I wanted to lie down.

Ere came back and lay down beside me. He came near me and tried to kiss. I told him that I am not interested and pushed him away. That was the start of it. He would put his hand on my chest. I would push it away. The hand would come back. When I look back now, I know that if I had texted my friend and asked him to come, he would have come. But at that moment, I was petrified. Ere was tall and much stronger than me. I did not want to piss him off for I knew that I wouldn’t be able to fight him. My body had gone into survival mode. I knew that I just want to get through this one night. And so it went on. He would try to remove my bra. I would try to push him off. He kept coming back. I told him that I am on my periods. He asked me if I am lying. I told him that I could show my blood-wet pad if he is interested. I don’t know how I managed to close my eyes and sleep off. When I opened my eyes he was still there, staring at me. He said that it is not possible for him to sleep. He asked if he could masturbate in front of me. I just lay there. He jerked off in front of me. Then he went to the toilet to clean up. Some part of me was relieved. I thought that it is over. But he came back, pushed me down on the bed, got on my back and masturbated on me. By now, I was dead inside. Not a word or cry came out.

On the way back he dropped me near where I was staying. I stood motionless. He asked me, “What is wrong? Why don’t you smile?” I left. I was moving to another locality in the city that day. My friend noticed that something is off. I said that I am just tired. I took my bags, booked an Uber and left. I reached my new room. I kept the bags. Sat down on the bed. I burst out crying. I had shut down before this. I was sobbing uncontrollably so I started washing clothes to distract myself. I knew that I did not want to go back home. I did not want to let go of my dream. I told myself that I will look for other work. And I will keep pursuing my dream. I could not let this incident break me. I started giving tuitions to school kids.

Meanwhile I would attend all the film events in the city. Ere started contacting me feverishly. I thought that if I don’t pick his calls for a few days, he would get the message. But then he tried to contact my family. That was it. I picked up his call. He started apologizing profusely. He asked me if I was coming with him to Goa. I told him that I wanted nothing to do with him and warned him to never contact my family or me. He kept apologizing. In my head this did not make sense. This guy was getting a film out from one of the best production houses in our country. And I am a nobody. I told him that if he is worried that I will talk about this incident then he needn’t sweat. His tone changed completely. He told me that nobody would believe me even if I spoke out. I understood that I had hit a nerve. I cut the call and blocked him everywhere.

The Harvey Weinstein incident came to light about a week after this. There was a wave of the MeToo movement in which people were coming out with accounts of sexual harassment. The group of people I was working with in Bangalore organized a meeting in light of this. I was sitting in this circle. People were sharing. I was nervous. When my turn came, I shared parts of my account. I did not take his name. At the end I changed my mind and put his name out there. My chest filled up with fear. My friends asked me to write about this. I wasn’t sure of reacting then. I was insecure. I did not want to be known for this. I wanted to be known first for my work. It took me a few months to process my feelings. Ere is a screenwriter. He is smart enough to get into somebody else’s shoes and speak from their mouths. So he knew what I was going through when he pushed me down to masturbate on me. He made a choice. At that moment he knew he was the one in power and he chose to abuse that power. I have a feeling that when his film gets selected for gender equality awards, he just sits back and gloats. I am not sure of how many more accolades we need to shower on this.”

After this #MeToo post there was a statement released by the production house stating, “We, Zoo Entertainment, would like to offer our fullest support to the Me Too movement. We strongly believe in the equality of all people, and wish to express our solidarity with the Me Too movement towards making our society a safer and better place.”

Further added,”We note that the concerned person has chosen to remain anonymous. We understand that Gowda is yet to give his statement regarding the allegation. We find the allegation shocking, and are deeply disturbed and saddened. As the producers of Balekempa, directed by Ere Gowda, we feel a need to take decisive action regarding how we wish to take things forward with the film. As of now we are withdrawing the film from all its festival commitments until we have further clarity on the facts.” 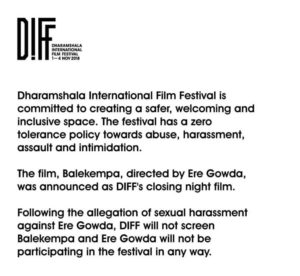