The KGF movie makers had given a new dimension to Kannada cinema, through its pan India sucess. But recently, A Telugu local channel has aired the Telugu language version of KGF movie illegally. The KGF team outraged that it was illegal and warned that they would fight legally over the channel illegal telecast.

The Telugu TV rights of KGF movie is yet to be sold. The local channel has already aired. Thus, Kartik Gowda, executive producer of the Hombale banner, tweeted, A telugu local channel named Every^ is playing KGF film illegally. We will move legally against them and sue for their actions. While the satellite deal is on talks and almost finalised, a cable channel does this. We have ample proof woth screen shots, videos of the same.” 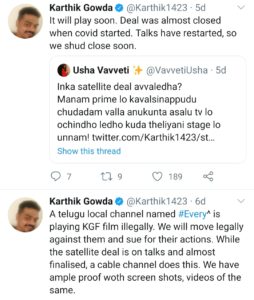 “It will play soon. Deal was almost closed when covid started. Talks have restarted, so we shud close soon,”Karthik Gowda said.

It has already been announced that KGF2 will be released on October 23rd. Although the date is not surprising as Corona virus has caused nationwide lockdown, as of now no news has been revealed from the film team. 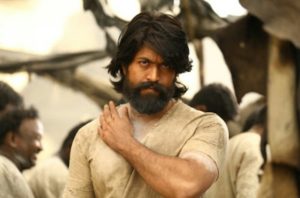