Everyone knows that KGF kannada movie has one old hit kannada recreated song. Now there will be a new recreated song for KGF hindi version too. The song shoot was completed on Saturday, which had an amazing set.

Actress Tamannaah Bhatia shot for the recreated version of the song “Jokae naanu balliya minchu”, a song which was picturised on late Vijayalalitha from the film “Paropakari” an old hit kannada movie.

KGF trailer was a huge hit which had millions of views in all languages for its brilliant making. As the movie is getting released in 5 different languages, the makers have decided to recreate a special number for Hindi language audience. The bollywood audience are stunned by this magnum opus movie trailer and are eagerly waiting to watch it on big screen this December 21.

Just few weeks ahead of the movies release, the song which Tamannaah had groved too will have a new version in hindi. Whereas, the southern version will have Tammannah and Bollywood version gets a new track, according to sources. Whereas for both the recreated songs, Yash had managed to carry similar costumes. Ganesh Acharya will be choreographing this recreated hit hindi song.

Recently the shooting of this song was held in Guregaon, Mouni Roy has been brought on board for a special song for Farhan Akhtar and Ritesh Sidhwani’s KGF. It recreates Sangeeta Bijlani and Jackie Shroff’s chartbuster, “Gully Gully Mein Phitra Hai”, from their 1989 film Tridev.

Now the movie gets double dose for music lovers with brilliant music and BGM from Ravi Basrur. The new version is a party track recreated by Tanishk Bagchi for KGF Hindi movie. 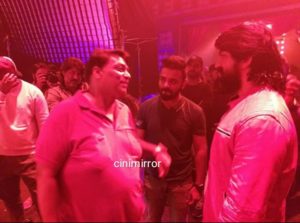