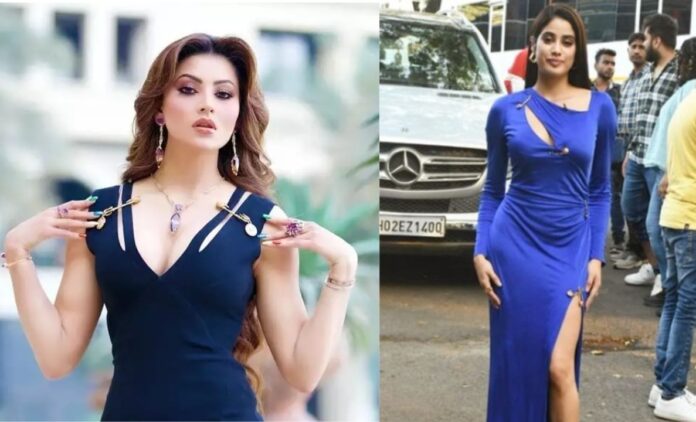 The talk of the town right now, Urvashi Rautela the newest starlet in Bollywood, who has made India proud at every step. Urvashi Rautela is the young woman in control of her international brand and celebrity. She is the most followed Asian actress on social media with 58 million Instagram followers. She is one of the most loved celebrities globally.
Actor-model Urvashi Rautela is not risk-averse when it comes to experimenting with her fashion choices. The stunning actor is widely adored for her brave and edgy sartorial choices. Her fashion choices have always left fashion lovers in awe. Undoubtedly, she is a fashion inspiration for many new actresses in the Bollywood industry. Other actresses from tinsel town always aim to copy the scintillating looks and outfits of Urvashi, which were worn by her for a long time. Which one is Janhvi Kapoor, who copied Urvashi’s Versace dress during the promotion of her movie.

Her Versace dress featured a plunging neckline and thigh-high slit with safety pin details carrying the signature Versace Medusa logo on it. Whereas Jahnvi donned that same outfit in a blue color with just a different neckline and safety pin details all over. Urvashi had worn the same outfit during the shoot of her song “Versace Baby. We adore Urvashi for continuing to raise the bar with her fashionable apparel. We clearly can’t stop obsessing over her beauty. Can you?

On the work front, Urvashi will be seen in ‘Inspector Avinash’ opposite Randeep Hooda. She is also making her big Hollywood debut along with 365 Days star Michele Morrone, which will be produced by Netflix, Tomasz Mandes, and will be directed by 365 Days director Barbara Bialowas. The actress is going to play the lead role in a William Shakespeare bilingual thriller ‘Black Rose’ based on the Merchant of Venice, along with the Hindi remake of the superhit ‘Thiruttu Payale 2’ and has also signed a three-film contract with Jio Studios and T-Series. Urvashi will also be seen opposite international superstar Jason Derulo in her next international music single. 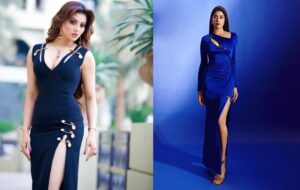