Powerstar Puneeth Rajkumar has a powerful voice for kannada cinemas, in an event he asked PVR Cinemas to give more screens for kannada movies. Also said that Film City built in our state if built like Ramoji Rao Film City in Hyderabad it will be good.

Speaking at the inauguration of PVR’s One Hundred Screen at the Orion Uptown Mall near KR Puram, he said the budget for the film city was Rs 500 crore. The announcement has made all of us happy. Like Ramoji Rao Film City, here if there is a Film City it will be nice. This will facilitate cinema production. He added that a large number of tourists come to the state.

Responding to a question about where the film city should be built? Actor Puneeth said he was happy with any location. We will have a good place to shoot. It is not like in Bengaluru or Mysore, any place is fine.

Give Kannada cinema a good chance in PVR. I enjoy watching cinema in the theater. It is fun to watch cinema among the people there. He remembers watching Jogi Cinema at PVR along with Dr. Rajkumar and actor Rajinikanth Sir. At the same time, Puneet appealed to Kannada films to be given more priority in PVR. 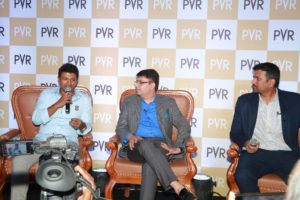