The most anticipated Pogaru movie starring Action Prince Dhruva Sarja is all set to hit the silver screen. The big event for Pogaru audio release is being organised by the team. It will be unveiled at Davangere even before the movie hit the theaters.

The Pogaru movie is releasing this month on 19 February. On the eve of Valentine’s Day, The movie team has organised an audio release function at Davangere. There is already a great preparation going on for the unveiling of the music album. Now, the team has announced one of their cheif guest’s name for the event.

A special guest will be on the platform of the audio launch held on Sunday. He is none other than former CM and opposition leader Siddaramaiah. He will be attending the event tomorrow.

On Friday, Pogaru movie actor Dhruva Sarja and director Nanda Kishore invited Siddaramaiah to the audio launch event. Siddaramaiah has himself claimed this on his Twitter account.

In the movie Pogaru, actress Rashmika Mandanna will be lead opposite Dhruva Sarja. The song Kharabu from the movie has already set the charts on fire and trending on social media.

The commercial entertainer features Rashmika Mandanna opposite Dhruva Sarja. With Dhananjay playing a role with a negative shade, the cast also includes Sampath, Ravi Shankar, Tara, Sadhu Kokila, Chikkanna and Kuri Pratap. The music has been scored by V Harikrishna. 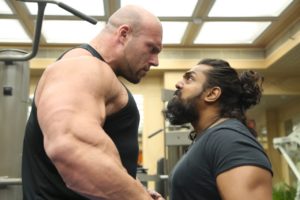