It is well known that actress Shanvi Srivastav will be playing the heroine in senior director Dinesh Babu’s 50th film Kasturi Mahal.

Actress Shanvi Srivastav’s first look at Kasturi Mahal has been released. Shanvi excelled with the look of the princess and was very much appreciated by the cine fans. This is a horror thrilling story and Shanvi is also highly anticipated.

The actress Shanvi, who tweeted about this stated, I am happy to inform you all that my first look from my next Kannada film Kasturi Mahal directed by Dinesh Babu. After my first Kannada movie, I am doing horror again and I am still waiting for a good opportunity. Happy support for all of you. ”

Here's my #firstlook from #KasturiMahal directed by Dinesh Baboo sir. Thanks again for all the support . #StaySafe pic.twitter.com/kSDPQjuqvv

Actress Rachita Ram was previously selected for the Kasturi Mahal. The actress, who was also present at the film’s muhurat ceremony, later withdrew from the film. Shanvi has been replaced and the first Look has also been released. 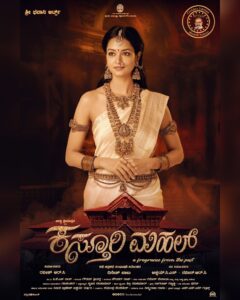