Actor-filmmaker Upendra is one of the most creative and the most underrated director in India. Over the years, he has carved a niche for himself and is known by the sobriquet Real Star. However, his fans have been saddened over his behaviour.

On social media there was a post by one of Upendra’s fan page. It said, ” He will not stop Remakes, He will not do Direction, He will not select good Script, Because he wont care about us, Thank you boss.” After reading this message from his fans, Upendra did reply to the fan. He said, “Please don’t think like this without “u” I am nothing. I will do what you like If you think that I should not do prajaakeeya and do direction I WILL.”

KGF trailer garnering huge appreciation for its director, one of the fans of Uppi vented out his disappointment on his favourite Director. His question to Uppendra was like this “,Have learnt anything from Prashanth Neel and team, how to get attention of the country in making movie? You dont want all these because you think you already did it. Fact is you busy in acting in remake movies ignoring fans desires.”

There was Uppi’s style of answer to this fan’s question by Uppi, “If ‘I’ leave for myself I am the best actor, director, Superstar and best of all others. But (UN) Fortunately i live for others( Like You). (Always think about others achievements and feel happy) That is why Prajaakeeya and not Rajaakeeya.” 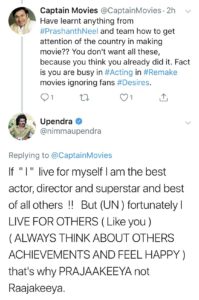 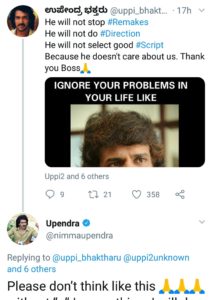 Being a popular star in the Kannada film industry, Upendra has a huge fan following. In fact, he announced his political entry last year. While there were a lot of speculations that he would quit acting or take a break from acting to turn politician full time, he surprised his fans by inking several new film projects.

After working as an assistant director, Upendra made his directorial debut with the film Tharle Nan Maga (1982), He then went on to direct some critically acclaimed films like Om (1990), A (1990), Upendra (1999) and Uppi 2 (2015). His fans loved him for his unique style of story telling, dialogues and direction.