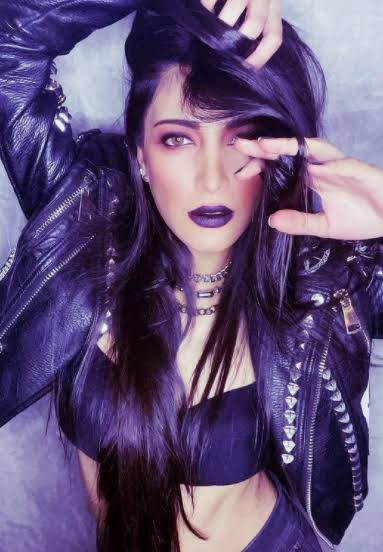 Fashion and cinema have often moved together and every few years there is a new trend that grips our minds. The current sensation seems to be the ‘Goth look’ which is slowing becoming a global trend and is pretty popular among the fashion conscious youth as well.

Actress-singer Shruti Haasan though, donned this style and has been owning the goth look ever since her debut film Luck in 2009. Her love for black isn’t unknown and her fashion choices have always been individualistic rather than following the herd.
With the goth look currently being a rage, Shruti’s DMs and inboxes are inundated with messages from fans asking for tips, product queries etc.

It is very evident that Shruti’s love for Goth is not just restricted to fashion but also reflects via her poetry, music and the mind set she lives in. And we just love her for that!

Shruti, who is fondly called ‘Goth Papa’ by her fans and followers is also a firm supporter of sustainable fashion which essentially means reusing or buying pre loved clothing instead of purchasing new pieces. Last year she had organised a Charity Closet Sale too with Dolce Vee which had dress pieces and jewellery from her wardrobe.

Currently, Sruthi is busy with Prabhas starrer Salaar directed by Prashanth Neel, and Shruti Haasan will be sharing screen space in Gopichand Malineni’s directorial NBK107. She will also work alongside Megastar Chiranjeevi in Chiru154.