This is a big news for the Power Star fans, the dubbing of Puneeth Rajkumar’s ‘Natasarvabhouma’ has been completed. As the actor had no film releases this year till now, the fans of Puneeth are eagerly waiting to see him on big screen.

On Monday, Actor Powerstar Puneeth Rajkumar was happy to share a message that his dubbing work for the movie Natasarvabhouma is completed. The movies post production work is in full swing, and director Pavan Wadeyar is making all special to treat Puneeth’s fans. Mostly the movie will be ready to release on January 11 or 18 on the festive day.

The movie Nata Sarvabhouma is shot in Bangalore, Kolkata and other places where the team has filmed some important sequences and a couple of songs.

On Puneeth’s role in the film, we hear that he will be appearing as a journalist and Anupama Parameswaran will be seen as a lawyer.Natasarvabhouma will be an action-packed entertainer. Puneeth’s action sequences are choreographed by Peter Heins, and this will be one of the highlights of the film.

The film, produced by Rockline Productions, has Rachita Ram playing one of the heroines, and the search is on for another female actor. D Immam is scoring the music and cinematography is by Vaidhi. 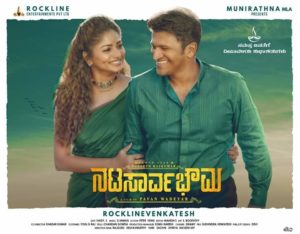