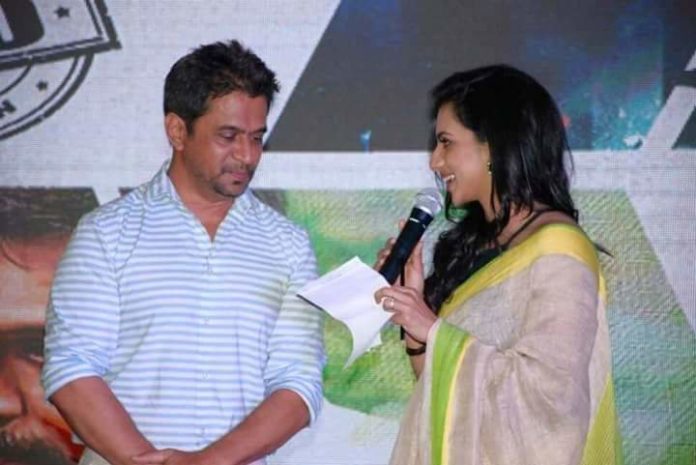 MeToo movement has slowly started in Sandalwood Industry with actresses coming out and sharing their painful stories. After actresses Sangeetha Bhat, Sanjana Galrani, now another big actress come forward to share her horrifying experiences at the shooting set.

On Saturday, one of the leading Sandalwood Actress Sruthi Hariharan did share her MeToo incident faced while shooting with Action King Arjun Sarjaa, on the sets of Vismaya movie last year.

Here is her post on Facebook, “The #metoo movement has made many of us comfortable with sharing our uncomfortable realities! This movement has empowered survivors of sexual violence to come forward and share their stories with the world! I often see individuals refraining from talking about experiences of sexual violence because they feel they don’t embody what it means to be a “Perfect Victim”. Sexual Violence is about power and privilege, every time a perpetrator is called out, it’s like saving more vulnerable girls from being vilified under their shadows. With the current reckoning happening around the world, #metoo has helped us fervently resist systems of oppression that have been maintaining power for far too long.

I thus believe that the #metoo movement is one of the most efficient use of social media that will attempt at cleansing our patriarchal, sexist and misogynistic society.

Having said that, it is time to break my silence.

Growing up, I have been sexually harassed multiple number of times. I am pretty sure, most women have. An obscene remark or unwanted sexual advances, in a social or professional setting, have made many of us uncomfortable, uneasy and terrified.

When I first started working on films, I was looking forward to great learning experiences and challenges, all in a professional and conducive environment. But today I write this with immense ignominy towards the industry I belong to! This industry has helped me achieve my dreams, explore my capabilities and inspired me to be versatile. It breaks my heart to share that I have felt unsafe, disturbed and disappointed in far too many situations.

The most common attempt at harassment in the film industry is the Casting Couch which would be presented as a prerequisite for work opportunities. Non-compliance of the couch would result in losing that opportunity. Sometimes they simply say, “compromise, or, someone else will”…. the stories get darker.

Honestly, I have been lucky as I have managed to escape physically and mentally scarring situations. However, in late 2016, there was one incident that left me startled and took a while for me to recover.

I was shooting for a bilingual film which starred Arjun Sarja. A man whose movies I have grown up watching. I was excited avout the opportunity. The first few days seemed normal, I played his wife in the film and that day we were to do a romantic scene where we had to hug each other after a brief dialogue. During the rehearsal, we delivered our lines and Mr. Arjun hugs me. With no forewarning or permission, he runs his hands intimately up and down my back. He pulls me closer with my body taut against his and asks the director if we could use this idea of foreplay in the scene. I was aghast. I am all for depicting realism in cinema, but this felt absolutely wrong. His intent seemed anything but professional. I hated that he did it and angry that I didn’t know what to say then.

Scenes are rehearsed before we roll camera and begin shooting. It helps understand staging, body language, actor dynamics etc. That’s the ideal process. You talk, enact, and finally find the balance in a given scene. As an actor, I am entitled to know/be consulted with, about the details of a scene especially when it involves something intimate. I’d also like to share with you that every actor I worked with before and after him, have never resorted to this kind of “improv”. The director sensed my discomfort too. I made sure I let the direction department know that I was not interested to be a part of rehearsals and will come directly for takes. I also shared the incident with my make up team right after.

The incident happened in front of at least 50 people on a shooting set- it happened at my workplace. I wanted nothing but to stay away from him rather than be tolerant and put up with his lewd and complete un professional behavior.

I didn’t want to go back, but as a professional, I had to finish what I had signed for. I continued shooting. During the course of production, every smutty innuendo he made, created an unpalatable work environment for me. His salacious invitations to meet him after work appalled me.

Looking back I remember attempting to normalise his behaviour and ignore his comments- lest there be issues in the production of the film in entirety. I maintained a cordial distance. All the while knowing he was wrong and wondering why he never stopped.

I choose to come out now, ‘cos henceforth I think Mr. Arjun Sarja needs to make sure he doesn’t cross the thin line between two actors and use his position of power to cause another person discomfort or hurt.

I choose to do this publicly – cos this movement is more than you and me and our individual experiences. It is a collective voice to question an existing system of power play and to call a spade for what it is. The point is to be part of a larger battle against years of female oppression and abuse. It is a movement to make sure no man ever takes a woman’s personal space for granted, whoever she is to him.