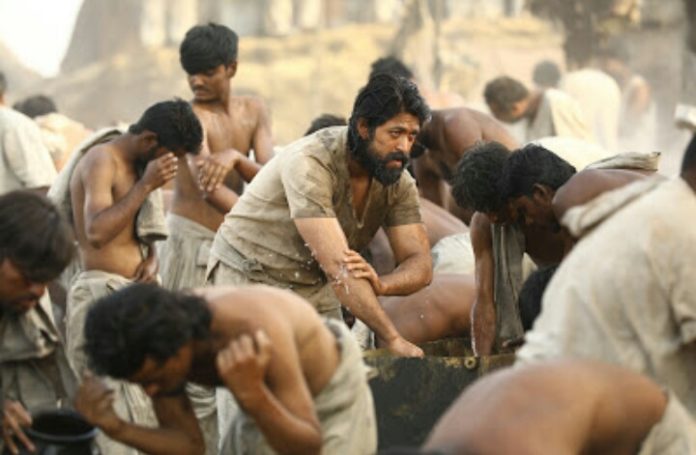 Touted as one of the most expensive films to be made in Kannada cinema, this highly anticipated KGF Chapter one of the two- chapter action drama, manages to enthrall you with its sheer scale and grandeur.

Painstakingly made, paying acute attention to detail for the minutest of sound and visuals, Prashanth Neel, who spent four years making this ambitious film ensures that the larger-than-life execution matches his grandiose vision. Though this swashbuckling action drama relies heavily on its making, sets and story, it doesn’t lack emotional resonance. It manages to be much more than a blood-soaked romp. The heart of the film lies in the simple thought that being monster is mightier than evil.

A period drama narrates the 17000-year-old history of oppressed waging wars against their oppressors. Set in the early 80s, KGF – the first chapter centers the protagonist who leads a battle against oppressors.

A small boy Raja Krishnappa Beria(Yash) brought up by his mother facing all hurdles in a region filled with all monsters ruled by money power. Before his mother dies, she gives him an advice that before he dies no matter what he does, he should die as a richest man in this life. He gets to know that the place to get himself an identity was Mumbai(Bombay). His journey starts by attacking a cop in mumbai when he is a kid. Then his daring attitude lands him to the den of Mumbai’s don Shetty. To whom he works and grows as such that nobody dares to enter or occupy the place as long he(Rocky) is around.

Looking at his growth and fame, he earns everyones respect in the town for his daring attitude. Shetty feels insecure and plans to eliminate him. However there arrives Shetty’s boss whom shetty fears, he comes down to meet Rocky knowing about his work and guts. Shetty’s boss makes a deal with Rocky to kill one person in return he will give Bombay to him.

Rocky accepts and  lands to Bangalore to kill that person but he could not kill, as that dreaded don had two monster sons. One named Garuda and another Adheera. Garuda is a monster who has his kingdom set in KGF, one has to kill the dreaded don(who is an El-Dorado- the golden king , who has created an Spanish empire covered with gold dust)  only after eliminating Garuda which is an impossible task.

Rocky takes the challenge and gets into KGF territory where Garuda has his own kingdom with 400 guards. His work is mining gold from KGF by forcefully employing 40,000 people as slaves. Whether Rocky succeds getting into the kingdom ruled by monsters? And will he reach out to the dreaded don and kill his monster son Garuda. Will he go through the pain which other 40,000 employed as slaves undergoing pain.

However, the elaborate attacking-scene climax makes the film a spectacular watch nonetheless. Very rarely has an South Indian film managed to achieve this feat. The casting is terrific. Yash is flawless as the feisty Rocky, he is the real monster who has taken the movie to heights with his acting. Every role carried as the antagonists are outstanding. They hugely contribute to making this routine good vs bad film a visual extravaganza…entertainment guaranteed.

The scene which sees Rocky singlehandedly attacking the gang who are rejoicing after capturing him and the climax scene is jawdroppingly iconic. Srinidhi Shetty as Reena does a decent job. Only thing that does not sync well is a song choreographed on Tamannaah, which she was not required and not visually entertaining. BGM will take the movie to another world. Action scenes are mind blowing and newly conceptualised. Every dialogue uttered by Yash and other characters will entertain the audience. Take a bow Prashanth Neel, spell bound by your creative work. One can watch this movie number of times without getting bored even for a minute.

Our overall critic’s rating is not an average of the sub scores below.