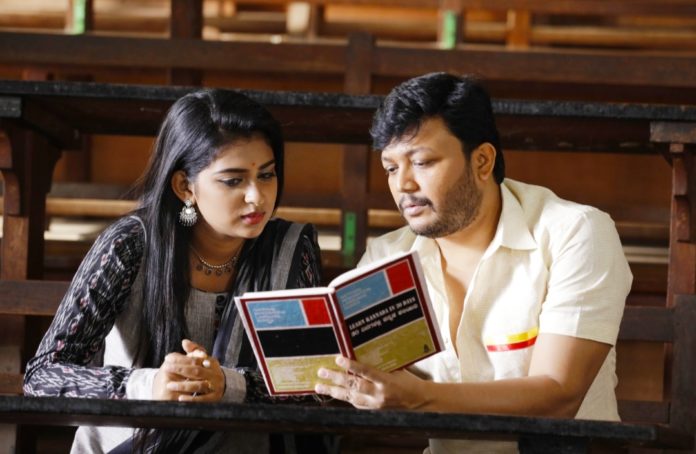 While Geetha movie made an impact on audience through its trailer on giving a hint of a story that has 80’s Gokak agitation. Not just that Ganesh has tried something new with his role in this movie.

Everyone knows that Geetha title is one of the popularly known hit movies of Shankarnag. The makers have got this title registered for the character named Geetha on whom the whole story is narrated.

This movie reminds you about hindi movie Love Aaj Kal story which parallely has two love stories running in two era’s. Geetha has something similar to offer you, but it has a good story and screenplay.

A software engineer (Akash) who is raised in a family where both his father and mother stay apart. From his childhood, he would have never seen the love and affection from his parents. He finds a girl Priya(Shanvi Srivastava) who is honest and straight forward in his friends engagement. But he falls in love with Geetha(Prayaga Martin) after knowing her personally.

One fine day when his father Shankar (Devraj) tells Akash looking at his concern towards Priya is not just friendship its love. Akash in return asks his father the reason for Shankar and his mothers broken relationship. As the reason for his break up with his mother is revealed with the 80’s era love story that has Geethanjali( Parvathi) and the Gokak agitation which seperates them. The entire backdrop of 80’s episode is shown beautifully.

After listening to Shankar’s story Akash decides to move on his life doing things that he loves for. However, there are many twists and turns in the screenplay that leads to love, action and some drama. The similar love story of his father haunts him in his life. But here Akash takes a wise decision which his father dint take in his life.

The first half of the movie is fast paced but the second half looks little dragged. Ganesh has a performace oriented character which nobody can match him. But the action part is very badly edited, guess they were in a hurry to trim up due to length of the movie. One of the best thing in the movie is cinematography and dialogues.

In the second half, only comedy entertainment one get is from Ranghayana Raghu character as a candid photographer. However, it tests ones patience in the second half for its length and screenplay. It has a good story but the screenplay lags to keep audience focused till the end. Music by Anup Rubens is new and fresh not the regular Ganesh movie songs.

Overall, the production value from the producers creates a visual treat and shows their effort. Also director Vijay Nagendra has to be appreciated for this story. But the second half of the movie could have been better with the screenplay. It is a one time watch, the movie is a tribute to Gokak Agitation.

Guess the producer loves to act, so Syed Salaam has made his presence donning a khaki in this movie and earlier he was seen in Ambi Ninge Vayasaythu. Also the movie is co-produced by Shilpa Ganesh, and every character artists in the movies frame are ensured look good on big screen.

If the makers had used the entire starcast who were Kannadigas, it would have been even more better. The dialogues in the movie makes one feel to love their language.