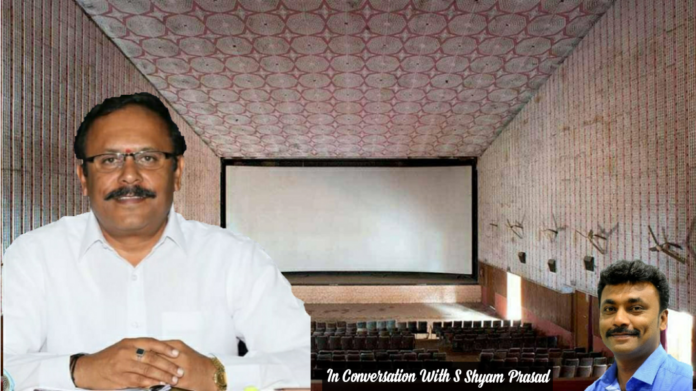 It is showtime again. But the shadow of Covid still looms large. After an agonising seven months, film theatres have opened their doors again. A handful of them started screening reruns yesterday. Many more theatres are set to open today. The president of the Exhibitors Association and former KFCC President, KV Chandrasekhar talks about his expectations in a tete-a-tete with S Shyam Prasad

Q: Are re-releases the mainstay for the time being?

A: Yes, all other states are re-releasing movies released earlier. Several movies across other languages were released and ran for 2 days on Friday and Saturday before the lockdown was clamped down. So all these language movies are getting re-released. In Kannada movies such as Kanadanthe Mayavadhanu, Shivaji Surathkal and others din’t get much time in theatres due to lockdown. So they are all testing the waters again.

A: There is no question of being economical during Corona crisis. To protect the industry and show our presence to the audience we have to forget about the concept of profit or loss. If we think about that, nothing can be done. Covid has affected the entire world and every industry and not just films. I do not expect many people to come to theatres in the first two weeks. But we are witnessing other businesses and sports like IPL opening up. Slowly, we may go back to normalcy.

Q: Unlike IPL you cannot screen films to empty theatres. Without releasing new movies can you entice audience?

A: The cinema industry runs only when audience come to theatre and watch. It it true more people come to watch new movies in theatres. But there are about five percent cinema loving audience who come to watch any film that is screened. They love watching movies only in theatres. Few watch for time pass and few have made it a habit to watch movies in theatres just for the sake of it. We have to see whether this type of audience come back to theatres and watch movies during all this financial crisis around.

Q: How long would it take for things to settle down?

A: We require a minimum of 5-6 weeks for our buisness to gain momentum and reach the stage we were before Covid. If no exhibitors and distributors come forward and be proactive the buisness won’t pick up for another 5 months.

Q: It might be months before the Government allows 100 percent seating capacity.

A: Yes, the government should feel it is safe. People should feel safe with possibly a vaccine in place. Nobody knows the future. Until there is clarity, it will be difficult times.

A: They feel business will not be the usual. I personally feel everyone in the film industry from artists, producers and anyone concerned should focus on what they earned a decade back in 2010 to live in 2020. If you want income and profits like in 2019, forget it.

Q: What are the changes that exhibitors have adopted?

A: We follow all rules mandated. Only packaged food. No preparation in theatres, so no popcorns, no samosas and burgers. so Audience cannot carry or consume food inside the theater hall. So the interval time has been asked to be increased. Movement will be restricted to ensure social distancing. Also there are two exit points, so that there is no crowding. We should see how the public follows all these without getting into arguments.

Q: Will the cost of operation increases for single screens now?

A: Yes, no doubt on that. We have to cut down on costs. There is reduction in staff numbers. As the staff’s health will be at stake, so we cant take a risk. Few things like staff arranging seats for those arriving late will be avoided. If you are late for a show you will not be allowed. The seating arrangements are made by leaving one seat vacant next to each. Even a family coming together aren’t allowed to sit next to each other. This rule is a drawback. Masks are mandated even while watching the movie. But we cannot be present inside the halls to check on this. They will for sure lead to fights and arguments.

Q: What numbers are you looking at today?

A: A few screens opened on Thursday. More are expected on Friday. I am expecting only 5 to 10 % audience on Friday and also for the next two weeks. There should be public awareness on this. Most people still don’t know about the reopening. If a big movie releases and people don’t visit theatres we cannot blame the hero.

A: It is better they don’t release now at this point of time. Let old movies or other releases happen this year. We should rebuild confidence among people that they can visit theatres without any fear.

Q: How many theatres are screening movies today?

A: It is just 10-15 single screen theatres in Bengaluru. Many are still making arrangements according to the SOP. Few theatres which had satellite content of their immediate previous release before Covid are able to re-release immediately.

We have to be strict following the Central Government guidelines of 50 percent seating capacity, social distancing of six feet, mandatory masks, sanitizer etc. 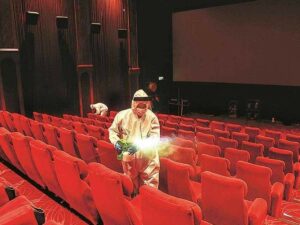