A perfect marriage is just two imperfect people who refuse to give up on each other. Keeping this theme in mind COLORS Kannada in a first of its kind attempt launches a romantic-comedy game show involving 12 celebrity couples overcoming the hurdles they have faced in their marriage.

Raja Rani a game show aired on weekends will be based on couples who despite their differences find their way for a successful and happy married life. The show will explore the bonding of this couples through various games.

The show with a social experiment will also bring about various ways to resolve the differences between couples by bringing the entertainment factor to it. The funfilled entertainment show would bring out the essence of relationships and unknown tales from celebrity home.

“Perfect couple is all about understanding each other, give, take and willingness to sacrifice. Through oodles of fun and entertainment, along with some tales of joy and sorrow, Raja Rani will unleash fascinating facts about celebrities and the success to their happy married life. The couples will be given various tasks. We are also happy to have Anupama Gowda as our perfect host for this show”, said Prakash Gopalakrishnan, Programming Head, Colors Kannada. 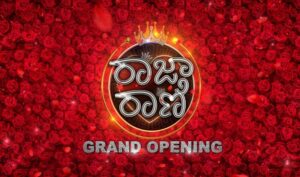