An interesting first look poster from Ikkat movie, starring Nagabhushana and Bhoomi Shetty was released on Sunday. The movie is written and directed by Esham Khan and Haseen Khan, who had previously worked on Loose Connection webseries.

The romantic-comedy Ikkat movie is based on lockdown situation, It was also shot during lockdown in a apartment complex with all safety measures and minimal crew. This will be the debut of Nagabhushan and Bhoomi Shetty as a lead actor in a movie.

The starcast also has stars RJ Vikky, Sundar, Naveen Chethana and Anand Ninasam. While the cinematography is handled by Lavith and Doss Mode scores the music. The movie is presented by Pawan Kumar Studios and produced by Tara and Aisha Khan.

In a post by Director Pawan Kumar on his social media account stated, Many artists created deeply moving, soul-stirring, spiritually enlightening art during the Lockdown. But a bunch of self-proclaimed artists did the opposite – A comedy movie called IKKAT.

It will move you from your seat with some laughter, stir your gut with some quirky characters, and light up your masked face with its simplicity, he says.

NOTE: I have not been paid to promote this film. The makes are genuinely in the BPL category, I saw their IT returns. They are very poor but their jokes are not, stated Pawan.

He added, I have promised them that I will get them at least half the collections made by Robert and Pogaru… the parking fee collections I mean. Please save my face and show some love and give some attention to this movie. 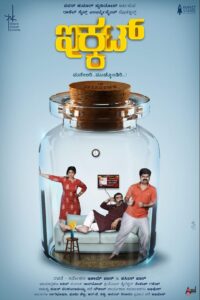