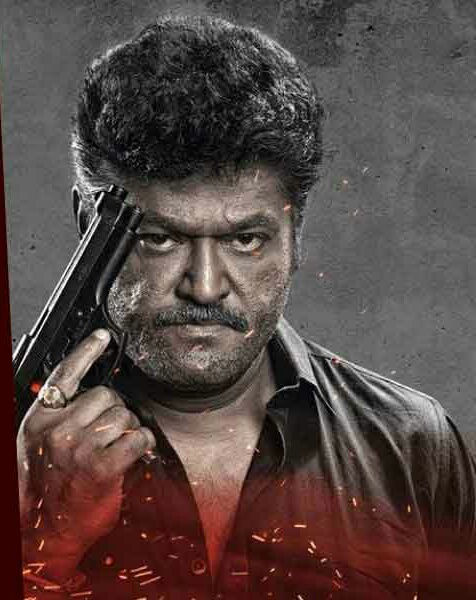 An honest spineless Police Sub Inspector loses his gun loaded with 8 bullets.  Who gets the gun and why, what happens next, whose lives are in danger? How a theft case becomes a more serious and intense criminal case is what 8 MM deals about. Yeah, the story does resemble Akira Kurosawa’s classic old film, Stray Dog and even a remake of tamil movie 8 Thottakal. As the tamil director was inspired to make this film watching many other movies.

Here Vasishta plays the spineless cop, someone who joins the Police Department, not because of passion but due to compulsion. He has done just what his role demanded, but he is not seen much on screen to entertain.

But the show stealer of 8 MM will be Jaggesh. He is someone who has proved his mettle in so many films. He has acted in such a vast variety of characters but it was comical. So far not even one film in the recent past has challenged him like this. Jaggesh shoulders the film right from the moment he enters the play. In fact the story takes place only after his arrival. Similarly Rockline Venkatesh is a good value addition to the script and we know what he is capable of. How many times has he played an investigative cop in films? Even he must have lost the count. The supporting actors also do a good job, thanks to the director for extracting some superior work from all stars and changing the lines which were dull in the tamil movie.

Two things work in favor of the film, the intense suspense drama and the underlying emotional plot associated with the story. The emotions in particular have clicked well. Director must be lauded for his gutsy thought to infuse a melodramatic play to a crime plot. That emotion makes the whole plot convincing.