Director Santhosh Gopal comes up with a unique script in his next movie. His previous movie Bindaas Googly was a dance based subject which had a good run at box office.

This time Santhosh has a bigger plan for his upcoming directorial, which will be a bilingual Horror – Thriller movie. It will be released in Hindi and Kannada. Also the director Santhosh says, “He has plans to start the movie in the mid December, if all goes well. There will be a huge star cast and many bollywood stars are in touch. Will be disclosing the details once it is officially confirmed.”

‘There is uniqueness in the story and the narration of the movie has a tight hold on the content. Based on the subject, yhe movie titled as ‘Mruthyu Lipi Puranam’, it is a horror-thriller genre,” Santhosh says.

He added, It is based on media’s social responsibility and awareness towards people. We also convey a messege to public that media is not just there for publicity or TRP but they even have the responsibility of social awareness. Also media is for the people and by the people. Whereas this project conveys good message to public about media.

Santhosh explains about the media role, “Here the journalists are assigned to cover news related to accident and danger zone. They decide to travel on darker side to discover the mystery faced in that darker regions. This movie is inspired by Bermuda triangle, which is mysterious and unresolved issue till date.”

The music for this yet to shoot bilingual movie is scored bu Vinu Manasu, Raja Shiva Shankar behind the camera and edited by Shiva Shankar. 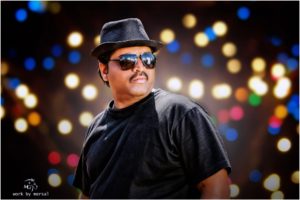