Director AMR Ramesh, who directed Attahasa movie which was on Veerappan’s Birth and Death, is apparently preparing to direct a web series called Veerappan. Last month, they released the Veerappan webseries curtain raiser.

The entire team if Veerappan just started shooting this web series. Recently, the state police officer ADGP Alok Kumar of Karnataka State Reserve Police has clapped for the first scene of the film. Actor Kishore, who has been cast as Veerappan, has joined the first scene shot for the webseries.

Kishore will continue to play Veerappan in this web series. Arjun Sarja will also be seen in the lead role. This web series is being broadcast in Telugu, Tamil, Hindi and Malayalam as well.

Director AMR Ramesh was unable to say many things during the movie shoot, so through the webseries Veerappan will be shown in detail.

Also keeping the Attahasa movie as it us, an additional image and a few elements will be added to it.

Speaking of media, AMR Ramesh said, “I already have 10 hours of content. One and a half hours of this is already ready. We’ll start shooting eight and a half hours soon. This 10-hour episode will be 45 minutes with 12 or 14 episodes.

There have been three movies so far in Kannada based on forest brigand. In the 90s, Devaraj enacted as Veerappan.

After that, Veerappan attacks and encounters came out with pictures there were Attahasa and ‘Killing Veerappan’ movie. 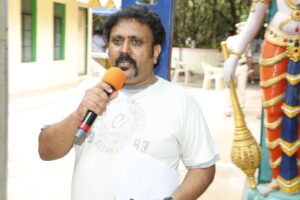